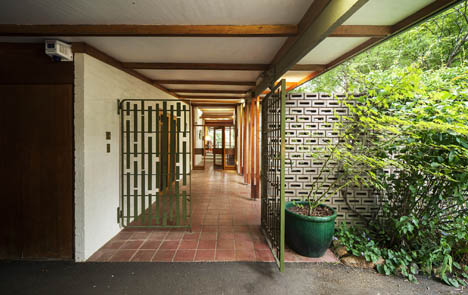 View from carport entrance through to front door, living room and deck.

Designed for Val and Heather1 (Nicky) Paral around the late 1950s.

Nicky wanted a sunken bath in the bathroom because of her back problem, despite my concern that its mass would absorb a lot of the heat from the water- proved correct.

The entry courtyard with its covered walkway to the front door was very successful as were the patterned cement block walls on both sides of the house.

It was a quiet, restrained house, but, as with the Hannan house my awareness of the need for low energy and resource use was not yet fully honed. The roof was Stramit – relatively new at that time, but it was (in retrospect) not fully effective as a thermal barrier. We had not yet fully woken up to the coming need for constructional corrections to prepare for the coming global warming and subsequent climate changes – nor becoming quite evident in 2015. The housing industry was completely indifferent to the looming problems.

The lower level was to be a flat for Nicky’s father and it is a cool summer location.

The current owner is delighted with it and has kept it almost as designed, except for an office added on the upper level which doesn’t quite work, aesthetically.

One of my best houses – and least known.