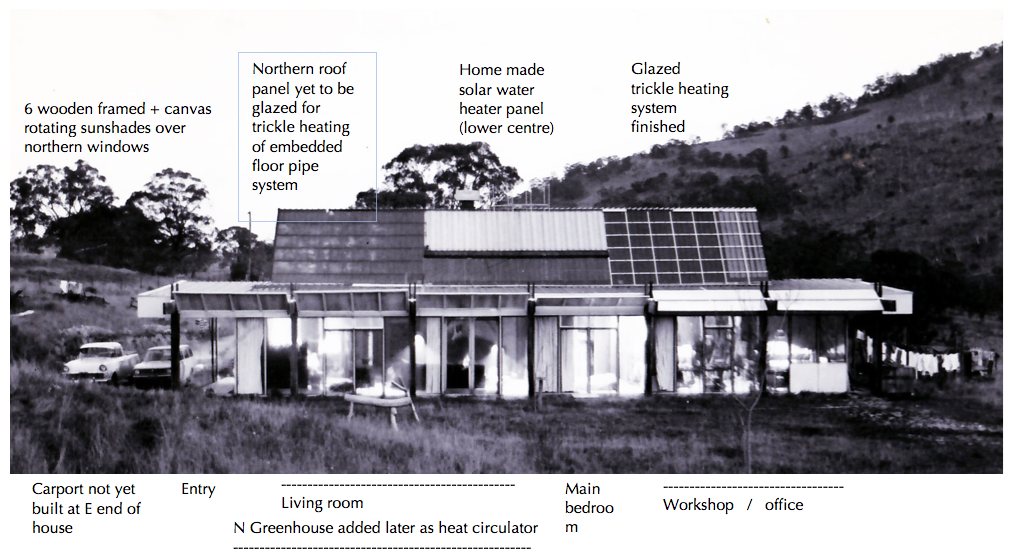 North face of Burra house around 1985 showing steel framed, glazed wall panels, adjustable panel sunshades above, solar hot water absorber in centre of top roof and experimental drip fed solar hot water collected and pumped through the floor slab. It worked for a while but the second hand pump broke down and was not repaired. Better photo needed – didn’t have much time for photography at that time. Photo estimated as being about 1980 – we sold up and left in 1991 to go to Mawson to research retrofitting of existing houses being the best and quickest return.

Designed around 1972 as a rigid steel framed house with non-structural walls (external and internal) to achieve maximum flexibility for varying family needs and for solar energy research complete with under-slab water tanks, in-slab hydronic heating in separate floor panels from a manifold by trickled water solar heated in roofing troughs with integrated solar water heating panel. The system worked until the pump broke down – couldn’t repair it.

Due to a steel workers’ strike around 1973 and being owner built I had to change overnight to an all-wood construction as I was on 6 mths long service leave from ANU and time was precious. Galvanising of steel components was almost impossible to obtain.

All internal walls were 19mm plywood sheets which fitted neatly between Bondek ceiling and concrete floor slab which were accurate to about 3mm – it worked well. Noise was no problem.

The fireplace hood was again a reinforced cement structure supported by a central brick wall which helped to brace the whole structure.

The under-slab tanks were dug by a backhoe and lined with 2 – 200micron polyethylene plastic sheets with Bondek roof shuttering for slab.

A conservatory (greenhouse) served as a heat collector in winter and was always ~10º warmer than the house and served to ventilate the whole house in summer with a large (2m2) central vent which served also as the flue from the fireplace. The greenhouse ‘heat intensifier’ heated the house by convection – very effective – a role model for future houses – not shown above.

I tried out various N shading systems to the northern windows and eventually sold the house in 1991 to start another venture at Mawson – retrofitting – the new challenge. 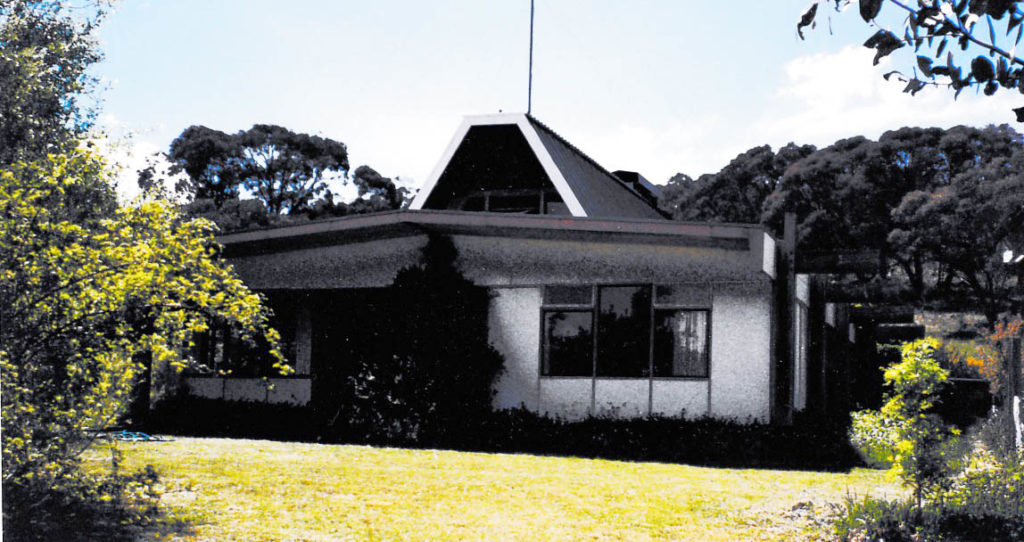 WEST END The solid HW portal framing of the house can be seen clearly along the south wall which gave a clear space inside with a metal Bondek ceiling to provide a diaphragm bracing panel over the whole house. And to give a measure of fireproofing between living space and roof space. My study/workshop was on the left and we made a granny flat at the SW corner. The steel infill wall panels can be seen and were made off-site in my workshop at Jansz Crescent. They were screwed into position on bitumised compressible sealing strips and to the Bondek ceiling – very quick and easy to erect. The first floor space was designed to be habitable with windows at both ends. We had a guest room at the west end with rough unfinished space to the eastern end for storage and future usable rooms.

The slope of the top roof section was designed specifically for solar technology @ 54º pitch for best use all year round and I designed my solar water heating absorbers to fit within the roofing channels which worked well. Photovoltaic panels were not then available – but foreshadowed and as friends wanted to buy the house in 1991 and we wanted to go back into town we never got round to installing them – we had mains electricity of course but the cost of supplying it to the block was much more reasonable in those days (compared to 2015)

By building it myself I was able to experiment without any interference from the Queanbeyan Building Inspector (a great relief).

I was able to experiment with a solar greenhouse on the northern side which more than proved its worth by acting as a heat collector and circulator of warmed air by convection throughout the whole house. I had already laid floor heating pipes with a circulating pump which was activated later by the new owners. Its unique construction lent itself well to several alterations that they have made to suit their way of living. It was a bold research experiment in its time and helped prove several concepts that I had but which the housing industry would not accept – they are still back in the medieval days and even in 2015 carry out no research into low energy design. 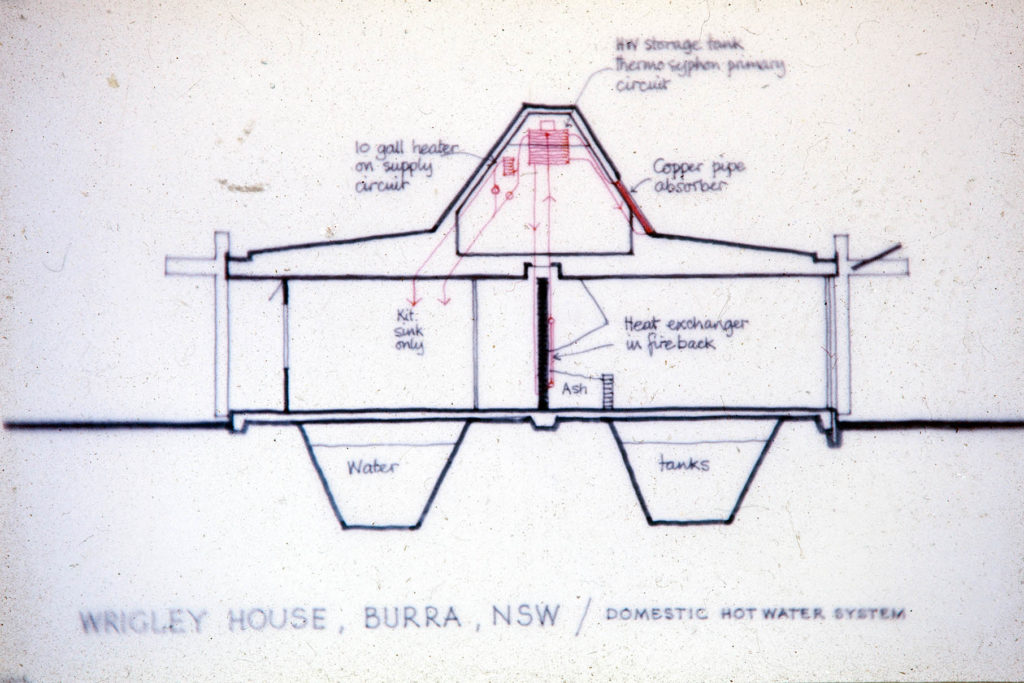 Cross section of the house looking west showing the diagrammatic solar hot water system integrated into the northern roof pitch which was calculated at 54º pitch to achieve equal solar gain winter and summer. Other systems – natural ventilation, greenhouse, floor heating coils are not shown but were very important in the functioning of the house. It was thought, in early concepts, that the southern under-slab tank could be used for low-grade house heating but was not found to be necessary. The house design had several options built in which offered alternative operating systems in case some did not work effectively. Cost to me was about $25,000 on DIY basis.

The house and workshop was built single handed by me between 1973 – 1991and Maxine and I moved in to an incomplete but livable house around 1975. We sold it in 1991 and moved to Mawson, partly because of the travelling times, pollution, children and by then I was convinced that my sustainability research should more effectively be devoted to retrofitting existing houses as designing better new houses were only 5% of new stock and 95% were existing. The Mawson house enabled me to design and install 23 types of retrofit devices which are described in the ENVIRONMENTAL section of this portfolio. This lead to me writing 3 books in the hope of spreading the retrofitting movement, but I have been disappointed in the responsive action because the housing industry is just not interested (no real profit in it) and very few owners are sufficiently interested or capable Do-It-Yourselfers – apathy seems to reign strongly from my experience – although the rewards are excellent. It is very depressing.