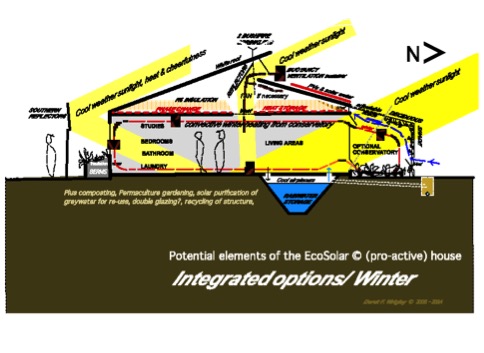 The EcoSolar house concept arose from my concern around 1991 that domestic running costs were a major factor in achieving more affordable housing, but that most house buyers were solely interested in the initial cost rather the long term running costs which could be much more significant to low income owners. It was clearly becoming obvious that fossil fuel costs would rise as the dangers of global warming became realised (around 2000 onward).

That fact, plus the fact that some 95% of houses existing at any point in time are already built it was also clear that retrofitting could become a major area for reducing energy consumption.

A further design problem in existing houses was that habitable rooms on the southern side of houses were often sunless, cold and less useful and yet it was not difficult to use sunlight as a means of warming these rooms. So, after moving to our Mawson house in 1991 I began experimenting with southern reflectors above dwg. as a way of capturing wasted sunlight to warm existing southern rooms in cool climate housing. It was only a short step to designing new houses that utilised more of the free natural climate effects such as sunlight, buoyancy ventilation and geothermal heating were indeed possible if we designed more rationally.

Combining these various free energy systems into a coordinated synergistic whole produced the EcoSolar concept which was partially trialled in the Wootten house in 2014 from the original concepts being discussed by me in The New Millwrights days in 1978-9.

From a historical point of view it is interesting to see how architectural concepts are slow to develop unless opportunity, money and personal available time coincide. The sole operator like me has a hard time in getting ideas accepted and the housing industry seems to be risk averse in this area to the point of social culpability.