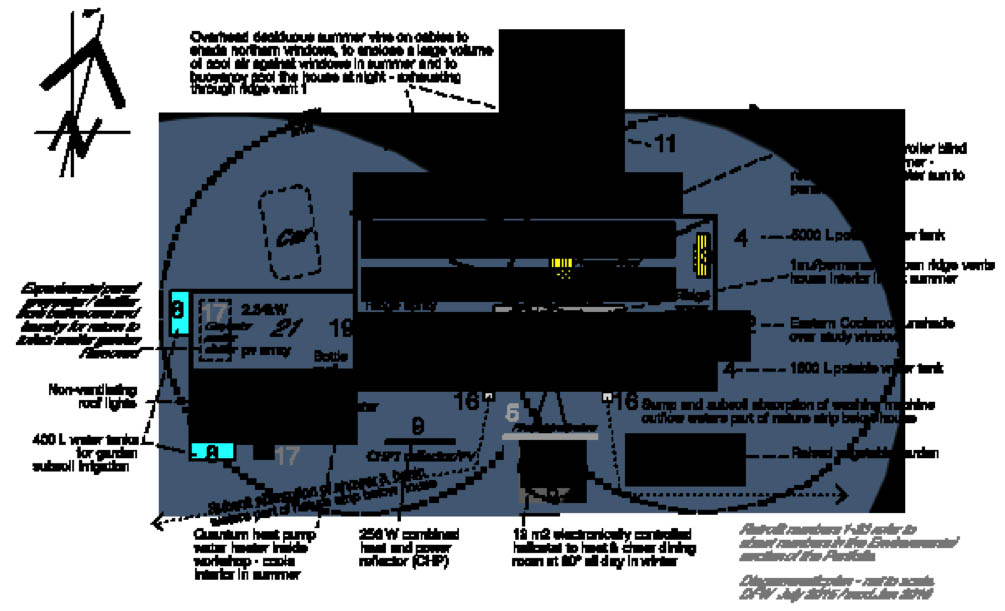 The numbers on the drawing above indicate the order of the following sheets which describe the various retrofitting ventures and what was learned. Projects 5, 14 and 17 were abandoned for various reasons.

This was an architectural research project covering about 24 years and the numbered retrofit techniques are more fully described in the Environmental section of this Portfolio 1991-2015.

The house was designed by Gary Wiillemsen, a developer, and was one of a group of 17 houses, part of a sequential development of 5 groups in Shackleton Park, Mawson, ACT.

I bought Unit 2 /72 Shackleton Circuit in 1984 partly as a retirement house when I could have been too old to live in the bush at Little Burra. The move, in 1991, came sooner than either Maxine or I expected when I reached the point of not being able to collect firewood any more for our lovely open fireplace (shoulder problems).

By 1991 I began to realise that if Australia was to effectively reduce its polluting emissions then it would be better to retrofit the 95% of existing houses than to build low-energy new houses which only represented 5% of Australian houses at any one point in time.

So – the double garage became my workshop and the two cars stayed outside in the cold (we sold one car around 1995 when Maxine retired from teaching).

Eventually, I tried about 25 different techniques to reduce energy consumption, reduce atmospheric pollution, increase comfort, make expensive, consumptive, polluting equipment obsolete (air conditioners, dishwashers), reduce water consumption. Virtually all have worked with varying degrees of success but all were worth the effort because we can all learn from failures.

In 2006 I wrote and produced my first book “Making your home sustainable” which has sold over 5000 copies, eventually through Scribe Publishing, Melbourne.

Almost all purchasers have been the general public – no builders to my knowledge have bought this book – the Housing Industry Association even refused to sell it !

From what I have seen of new houses, builders have ignored my recommendations, but there have been many queries from the DIY builders. Still in print in 2015.