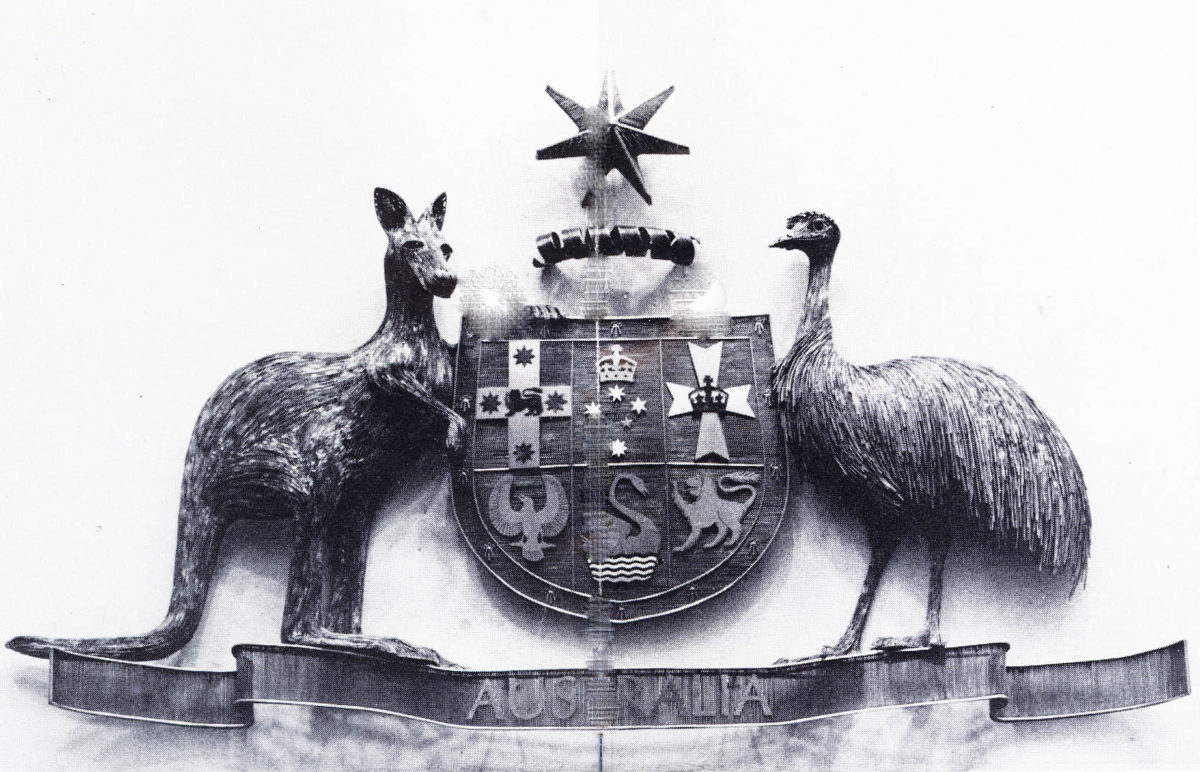 Around the time of my resignation from ANU in 1977 I was commissioned by Sir Garfield Barwick, Chief Justice of the HCA to coordinate the designs of the arms in the three Courts.

The Tapestry Workshop in Melbourne was to prepare a tapestry but they insisted on their own design without any ‘interference’.

I arranged with Peter Otto to carve a cedar arms for Court 2 using the design I had worked out for Court 3 – so that there would be some recognisable relationship between the courts.

I designed and made the copper arms for Court 3 in my Burra workshop.

Designing the connecting mounts to the concrete walls behind was a real headache as they had to be as invisible as possible from all viewpoints.

I made a small plaster model first that Peter Otto and I could work to to establish similarities and it worked well. I also made a full-size polystyrene model which served as a template for the wire bending.

Hoisting the two arms up was a nail biting experience but all went well without any glitches. 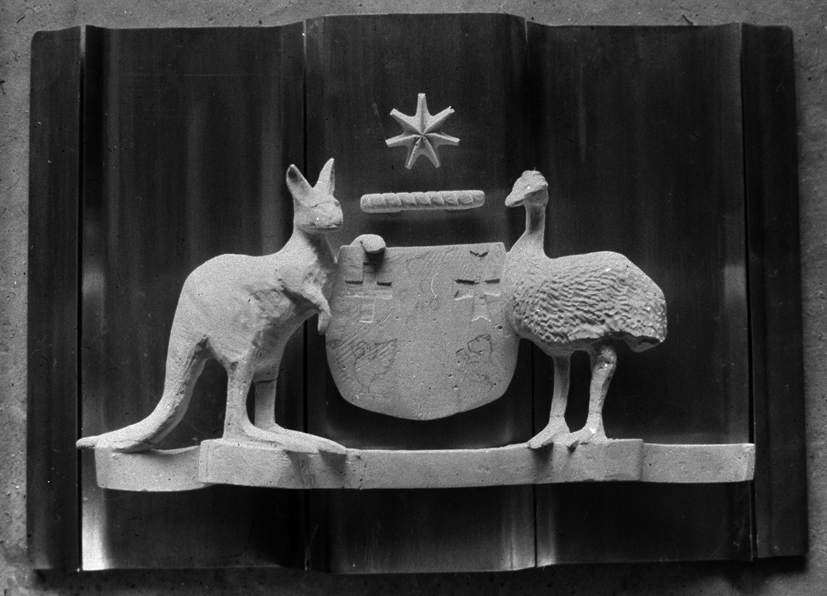 The small plaster model I made to get the massing right. This was approved by the Chief Justice, Sir Garfield Barwick.

From the approved small plaster model I made a full size polystyrene model which enabled me to visualise the actual size of the finished arms and how it would appear when a few metres above eye level in Court 3.

At the same time I was consulting with Peter Otto in Sydney who was carving the cedar arms for Court 2 and I was designing the structural steelwork bolted to the invisible concrete structure behind the panelling to support the very heavy carving.

Ensuring that the supports were invisible from most usual points of view was a very tricky exercise, but seems to have been successful.

Is better balanced than the model. 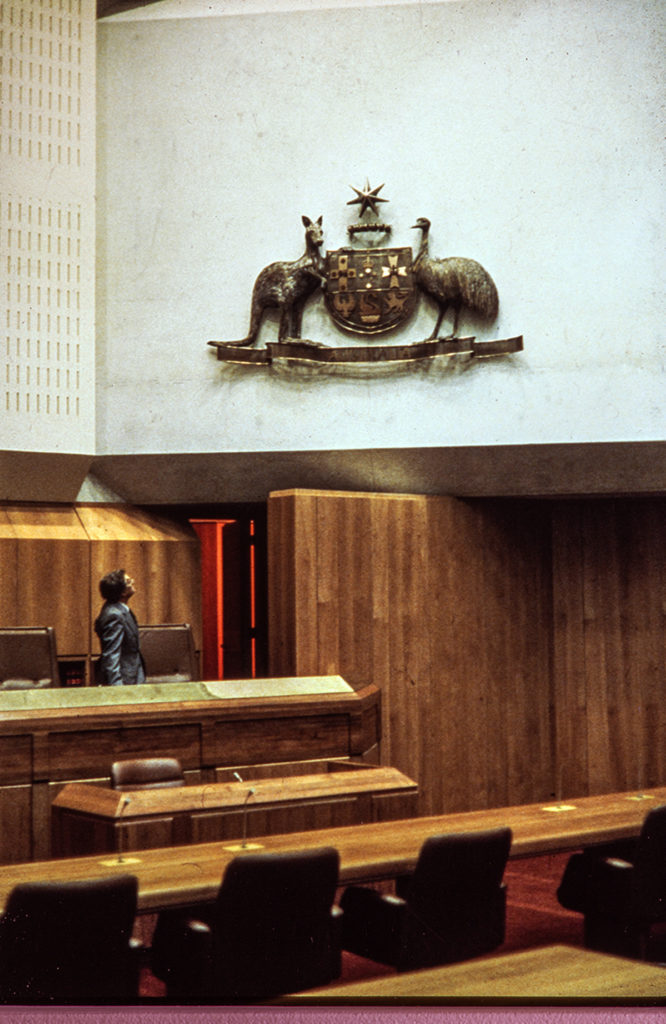 The final resting place for the many laborious hours of manipulating soft copper rods into the right position and brazing them together.

This photo was taken shortly after HM The Queen and the Duke of Edinburgh had toured the three courts and congratulated me on my very lifelike ‘ostrich’. I didn’t correct her.

The off-form concrete wall behind the arms is not, in my opinion suitable in this relatively close situation where every formwork mark can be clearly seen.

The blue cast on the panel behind the sculpture is over-emphasised by the camera and is not seen as that colour in reality – being more like the slotted panel on the left – the difference between the retina and Kodachrome film. 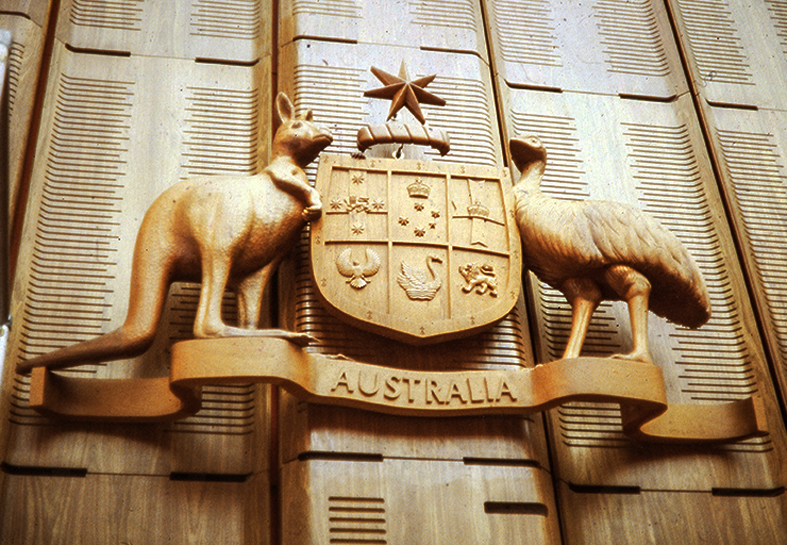 The Court 2 version in cedar by Peter and Lawrence Otto, Sydney who carved it based on my design to achieve some continuity of form which respected the material used.

The major problem in both cases was making sure that the supporting steel structures were not visible from the usual viewing positions – no mean feat ! 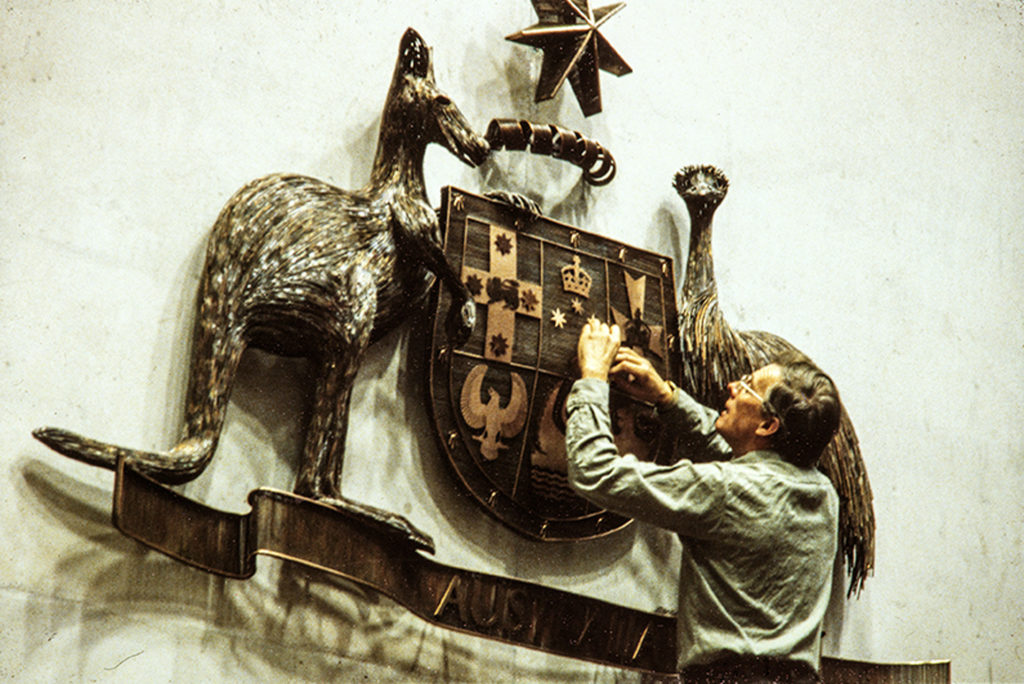 Putting the final touches in-situ. The shadows are unfortunate but are very hard to avoid – unless the lights can be softened in some way. Again, I feel the camera is tending to emphasise them a bit as I don’t recall being bothered with them in reality.