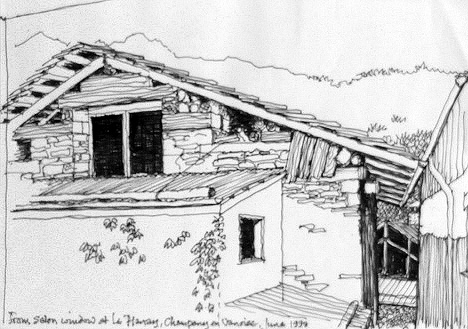 Pen and ink sketch at La Planay, France, while on a walking holiday with Maxine, George and Jean Winston. It was up in the French Alps with deep wooded valleys, cleared valleys to create pastures with lots of buttercups and grazing sheep and cattle with tinkling bells around their necks which sounded quite delightfully bucolic with the “Sound of Music”.

This sketch was done on a rainy day when walking was out of the question and was the view out of our bedroom window which was very small by Australian standards – about the same size as the lower window in the sketch which was only a farm building.

The construction intrigued me – unpretentious, made of local random stones with quite sizable timbers at the junction between wall and roof. The use of poles to keep the metal sheet roofing down was interesting, but apart from that element of modernity the structures could well have been 17th or 18th century. The main roofing material was convenient stratified stone slabs, but the closest buildings with steel roofing were most likely later extensions.

The black gabled window at the end of the alley appears surprisingly modern.

It was a delightful holiday with good walking. Ground hogs or marmots (?) were quite numerous – popping their heads out of the ground in quite a humorous and inquisitive way.