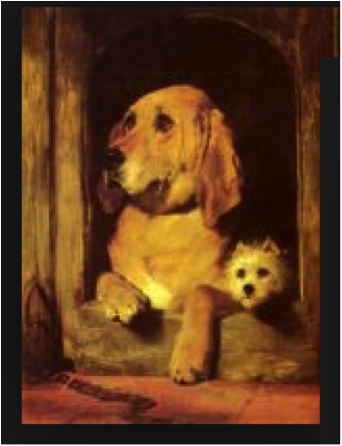 This drawing will have to be imagined – it was lost in the move to Langdale Avenue from Clarksfield around 1936 or 37.

I distinctly remember doing a quite large pencil drawing of two dogs, copied from a painting by Sir Edwin Landseer– one was a St Bernard or Labrador with tearful eyes looking out from its kennel with its companion, a cheeky Sealyham terrier which we had when I was very ill after a mastoid operation at age 4.

It was a difficult drawing to tackle at such a young age – about 12 – but there must have been an inner drive to draw which I have never really lost.

My drawing ability was recognised at Oldham High School when I came top of the class in Art and won a prize. The Art master was a Mr Bannister who awarded me a prize of ₤5 at that time. I remember his being rather annoyed with me for spending it on a small electric motor to help me build electric powered Meccano models. He felt I should have spent it on good sketching materials – but I was also top of the class in Physics and my creative urges were also in that direction – appropriate for my future career in architecture which didn’t resolve itself until 1940.

That story is told elsewhere…..