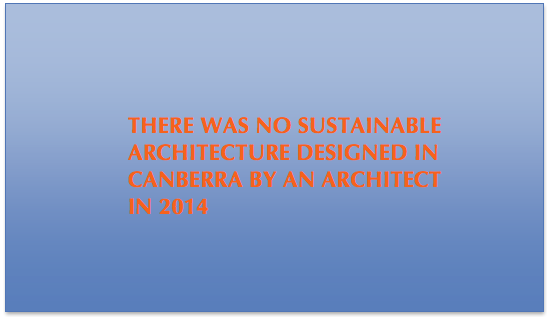 It came as a big surprise in 2014 to receive a letter from the President of the AIA to say that the AIA had decided to establish an annual award for sustainable architecture.

In August 2015 the AIA arranged its first dinner at the QT Hotel in London Circuit to announce three new awards :

Enrico, Gene and I were all guests at the occasion and we were each the subject of a video clip of five minutes each in a pre-recorded interview situation. We discussed on screen some of the relevant problems in our subject areas.

Awards were then presented in the first two of our three areas along with several other established awards. It had been apologetically explained to me by the National President before dinner and the awards that the judges had not received any submissions of appropriate merit in my category, so no award would be presented.

This had never been discussed with me before the event and even now I have not seen any certificate design which might have been presented – hence no illustration on this page.

That, I thought, speaks volumes about the public interest and came as no real surprise to me, but it was, nevertheless a bit disappointing.