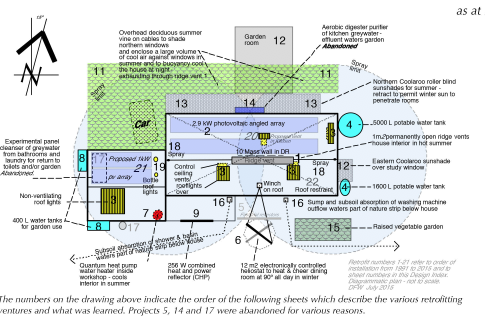 In my later years in Australia, stimulated by our move to a developer’s house in Mawson in 1991 was my realisation that modifying or retrofitting the enormous volume of existing and usually energy inefficient houses (95%) compared to the number of new (and presumably more energy efficient) houses at any one time (5%) should be the area of architectural research to which I should devote myself to make any significant impact on the reduction of atmospheric pollution. The Mawson house has been my convenient area of architectural research into reducing energy consumption and these concepts are all listed in this segment in their order of construction.

I wrote three books about the architectural approach to energy reduction which seem to have made some impact among house buyers and designers, but strangely not among builders or developers.

1991 saw a major shift in my approach to making houses more receptive to the free energies provided by nature – wind, rain, sun etc – all free forms of energy that are in abundance if only we humans could learn how to harness them efficiently and effectively with the minimum of technology. Technologies can, and often do, fail and humans also forget so the answers have to be simple, low cost, very little maintenance (if any) and easy to do if they are to be successful.

Weather patterns also change to our discomfort, so to be realistic, if we wish to remain comfortable, we have to devise adjustable forms of technology that can be easily and conveniently applied when the weather changes – so the useful sequence is to rely on the weather as much as possible with technology as a fail-safe back-up.

Unless the housing industry wakes up and embraces the benefits of good design in new houses our existing houses (representing about 95% of our total housing stock at any point in time) need to be modified to reduce their output of methane and carbon dioxide produced mainly from the consumption of fossil fuelled electricity and the burning of natural gas.

Ever since 1788 Australian houses seem to have been based upon the assumption that the sun is our enemy rather than our friend. Even a casual look at suburban windows when travelling along Canberra’s streets will show that at least 90% of windows are covered with either an opaque canvas pull down awning sunblind, closed venetian blinds or curtains – sometimes all three – and even during sunny winter days. This is a really amazing statement of widespread and profound ignorance, in that (for approximately north facing windows) no advantage is being taken to use free solar heat, it is often so dark inside as to require electric lighting, the view is non-existent and the value of having the window at all must be questioned.

The Mawson house has served as a research tool over 24 years simply because I was living in it and experiencing its results, both good and not-so-good (usually they worked quite well but I did have some disappointments – partly due to advancing age and inability to do things on the roof safely). Research on other people’s houses has many limitations often due to differences in expectations, often lacking the spirit of research and the necessary drive to achieve results plus a lack of philosophical acceptance of any small failures endemic in experimentation – failures are almost as important as successes as you learn what doesn’t work (and why), making the successes all that sweeter. Despite some setbacks the 22 retrofit projects have served their purpose of learning what is possible, giving an understanding of what not to do next time – if I ever get the opportunity. It speaks volumes about the deficiencies of normal house designs and the great need for research and application in the housing industry.

Out of the blue just before Christmas 2014 I received a telephone call from the Australian Institute of Architects to say that they were instituting the ‘Derek Wrigley Award for Sustainable Architecture’ and would I accept the honour ? Somewhat bemused I said Yes, expecting to be briefed with all the relevant information and some involvement. As I write, in June 2015 with the Award night two days away, no information has been sent to me about the conditions of the Award, who the judges are, who the winner is and it seems like I will not be asked to say anything. What if I don’t agree with selected winner ? All will be revealed no doubt.

At this point in time I feel that appropriate protocol and courtesy has been lacking.

I can’t remember where I discovered this creed but it became impressed on my memory and I felt it worth including in my portfolio as a statement I could identify with, believe in and pass on to others. I like to think it meshes well with my approach to designing.

It is a beautiful crystallisation of our aim as designers of anything – it not only identifies with buildings but is applicable to everything I have turned my designers’ attention to and beyond that to life in general. 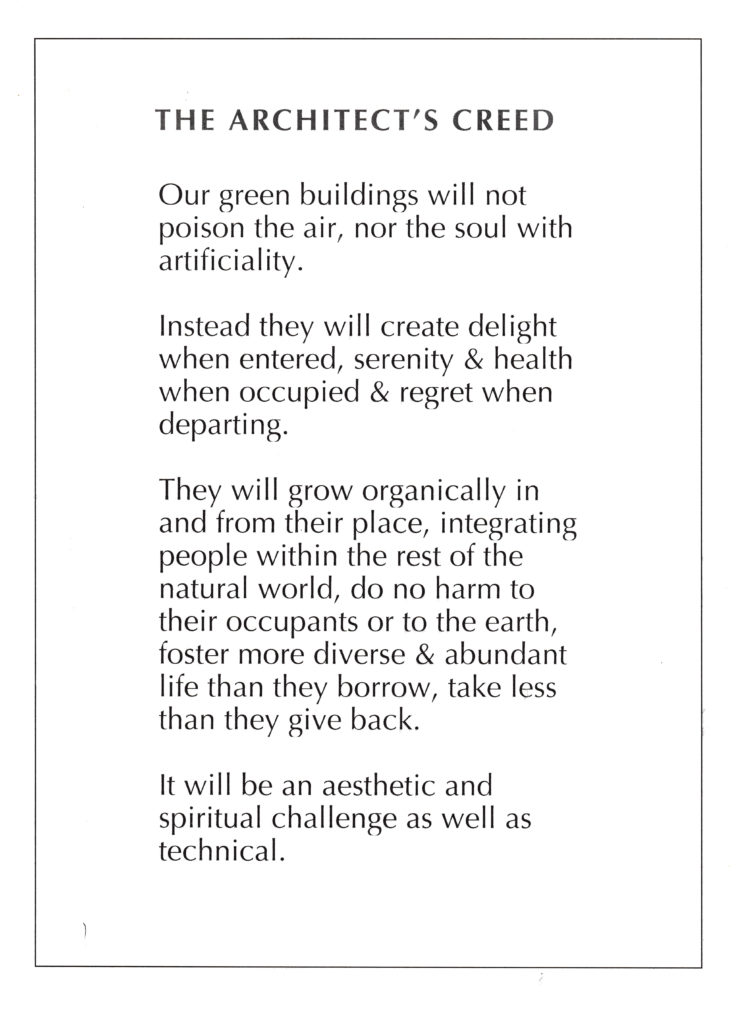