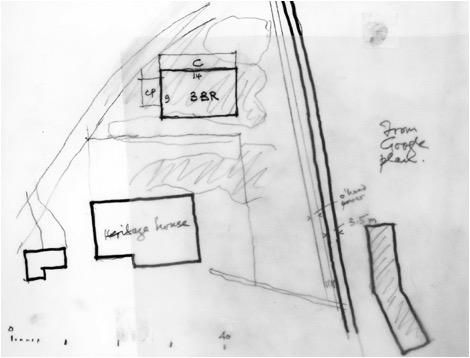 My first analytical sketch of Gregory Olsen’s block taken from a Google map. It is called the NEV Lot 15 Cluster.  Optimistically it is called HH4 by Olsen.

Gregory Olsen in Gosford contacted me to say he had bought into the Narara Eco Village (NEV) with the intention of attracting others to build four EcoSolar houses on the block roughly described above. A heritage listed house already exists in the LH corner and the purchased land surrounds it (so I believe) on the east and north sides.

I gave some early advice to the organisers of NEV but the ourchaser of this lot was promised it was suitable for 4 EcoSolar houses. It obviously wasn’t.