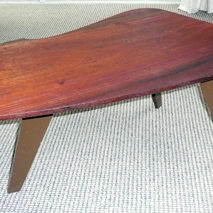 This coffee table was designed and made by me during the construction of my first house (OB1) at DeeWhy. It was made out of an old red cedar drawing board (complete with pin holes in the corners and 3 rather fashionable splayed legs – representing in retrospect one of my very few lapses into current stylism.

The profile of the top was then known as ‘free form’ around the 40s and 50s. Marjorie and Peter had it for years in their Adelaide house and it eventually passed on to their daughter who bequeathed it back to me around 2000 after her death.

I cleaned and repolished the top in 2015 so it has a somewhat sentimental place in our family history – now being 65 years old. I still find its free form rather pleasing but I find the brown colour of the legs rather discordant – perhaps it was all the paint I had !

The grain and colour of the red cedar top (one single piece of timber) represents in some symbolic way the profligate way that this Australian timber was used to the point of commercial extinction in the 20th century. The timber is now almost unobtainable.

PS I corresponded with Marjorie (an architect) for a year before I emigrated and it was her family that “adopted” me on my arrival and accommodated me for a few weeks until I was able to get lodgings, buy a block of land in DeeWhy and start building my first two houses. Her father and brother were architects and her nephew became an architect and she married Peter, also an architect.