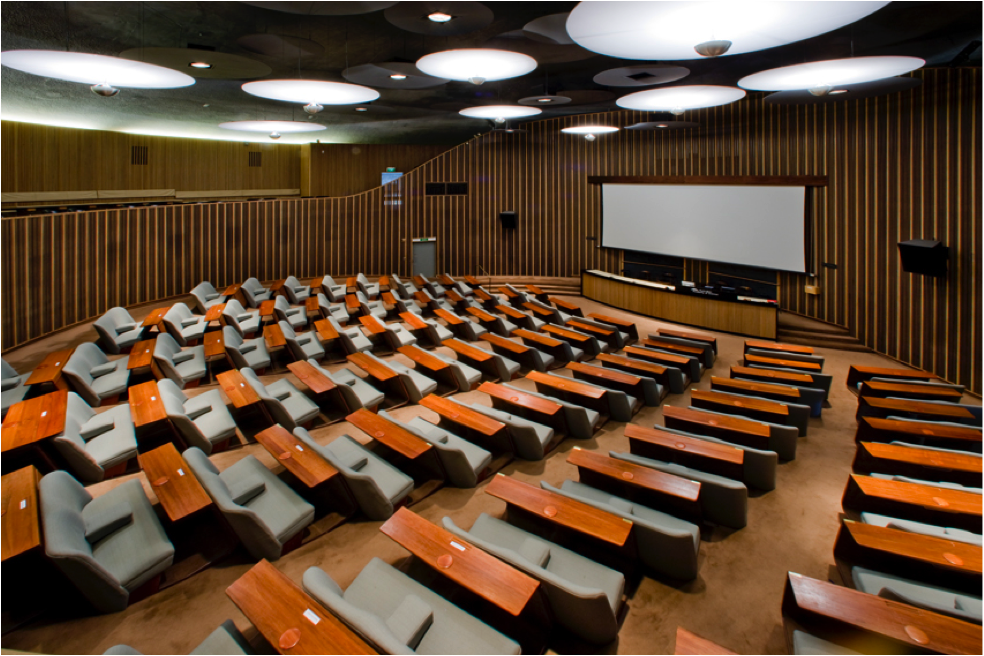 General view from the gallery of the unusual arrangement of two-seater settee units seating about 170. A very restrained colour scheme.

Fred Ward and I were commissioned at the request of Sir Mark Oliphant and Sir John Eccles to furnish the new Academy of Science building to be built in Acton, designed by Sir Roy Grounds. Fred took on the general office furniture while I concentrated on the Conference Chamber known as Becker Hall – now the Shine Room. Our design services were gifted to the Academy from the Australian National University.

This was a very unusual design problem – the floor was saucer shaped, having no parallel surfaces on which to sit a seating unit; the return air outlets for the air conditioning had to be under the settees; the brief stated that “the comfort was to be the equivalent of the back seat of a Humber car” (now extinct !), it had to seat two people for easy conversation (exchange of ideas) and the upholstery had to have the acoustic absorbency equivalent of its occupants – and it would have to be made outside Canberra as there was no firm large enough to take on such a large contract in this small town of about 30,000. They were eventually made by one of the large furniture manufacturers in Sydney – Ricketts and Thorpe. The upholstery fabric was specially woven by Eclarte in Victoria to give high absorbency by Catherine Hardress and Molly Groves. It has lasted well.

This brief led to a rigid monocoque construction of steel frame + wooden superstructure with a loose squab for access to the ventilation plenum under the floor. There was also to be provision for language translation equipment in the armrest (this never eventuated due to shortage of funds – and the predominant use of English ) but the potential remains for the future. 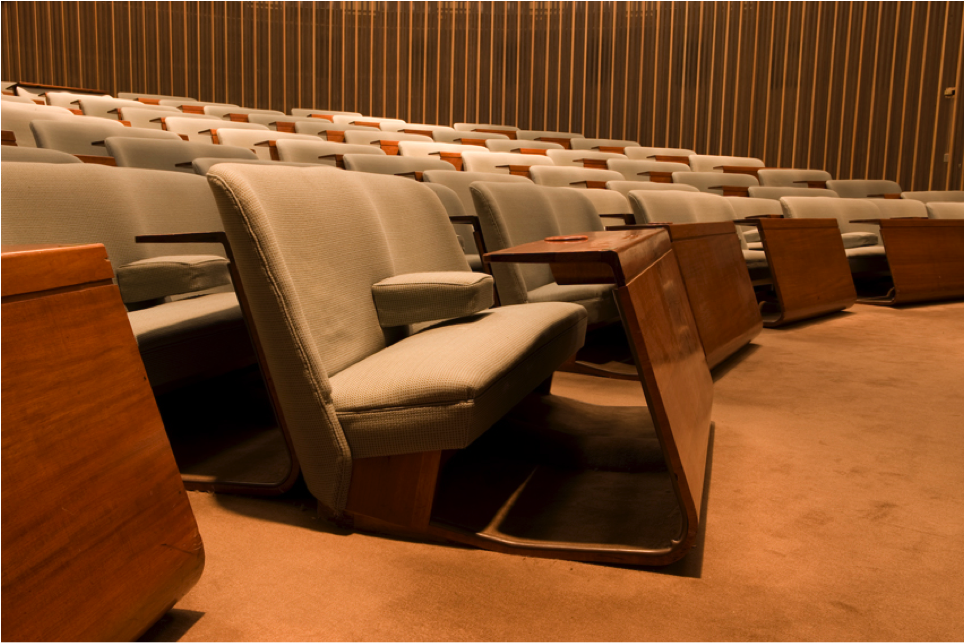 End view of one unit. The return air exhaust is under the removable seat squab (not well upholstered – but they have survived remarkably well for 55 years) 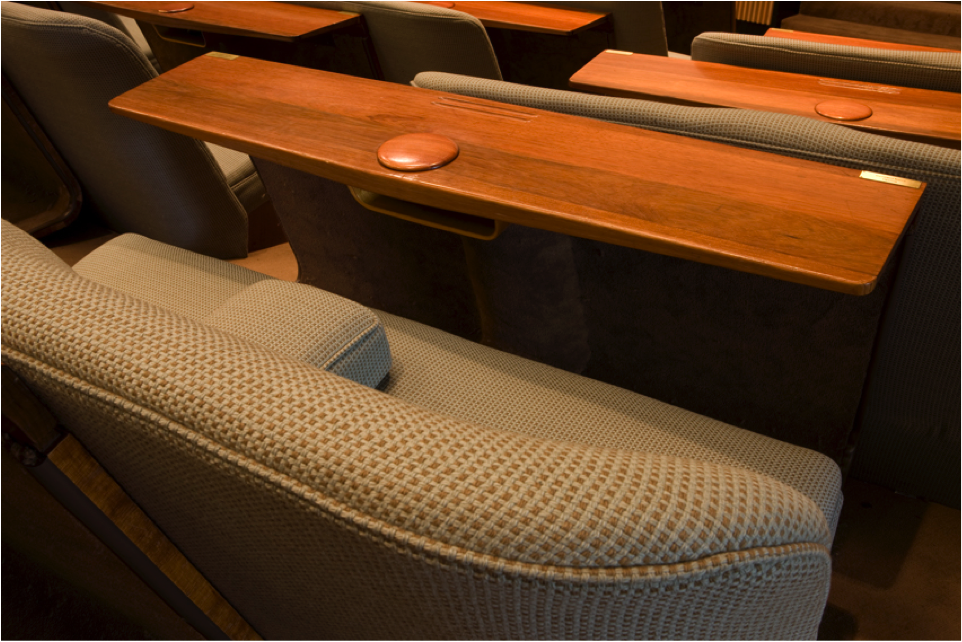 The ash trays of the smoking era had been removed and the hole filled with a rather insensitive button.

Nobody thought to contact the original designer on how to do it more unobtrusively. 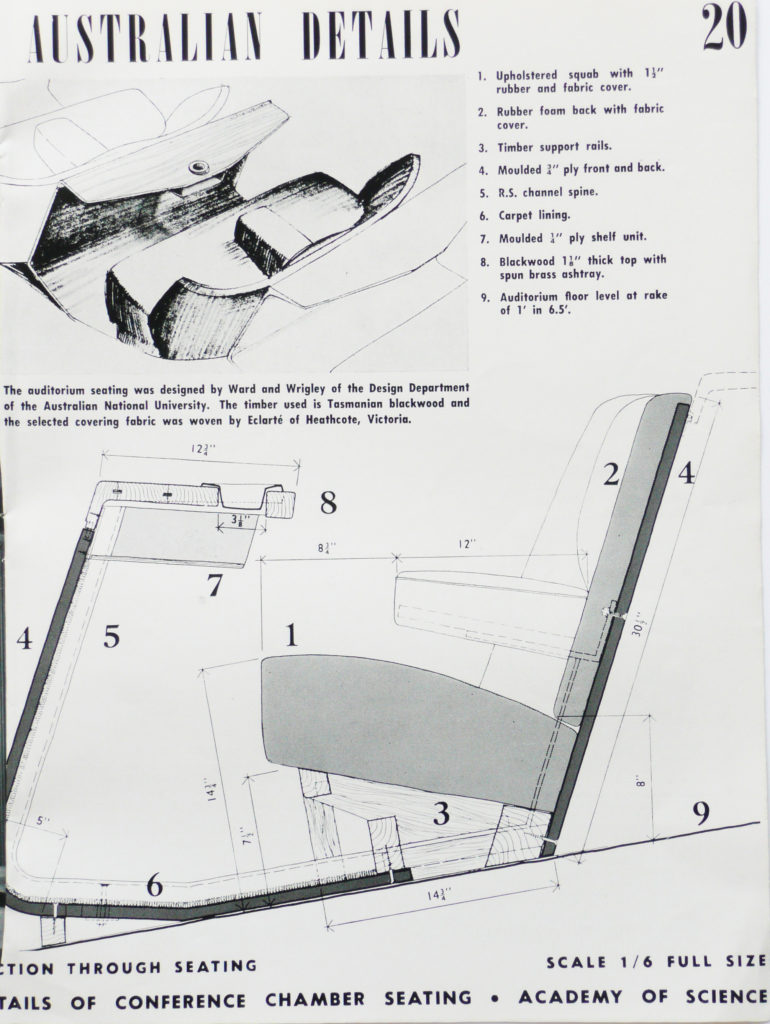 Magazine page taken from drawings by Wrigley to explain the construction of the Conference room seating.

The steel channel frame 5 (on dwg) rigidly linked the moulded ply forms of front and back making a firm monocoque unit for ease of transport from Sydney to Canberra and then adjustment of position by eye to achieve an elegant visual arrangement. What made it a bit tricky were the return air holes 3 in the base of the settee to provide the ventilating holes into the basement plenum.

Having sat through numerous lectures in that chamber I feel we satisfied the brief very well, but if I was doing it again I would raise the seat height to make access and egress a bit easier for the elderly members of the audience. 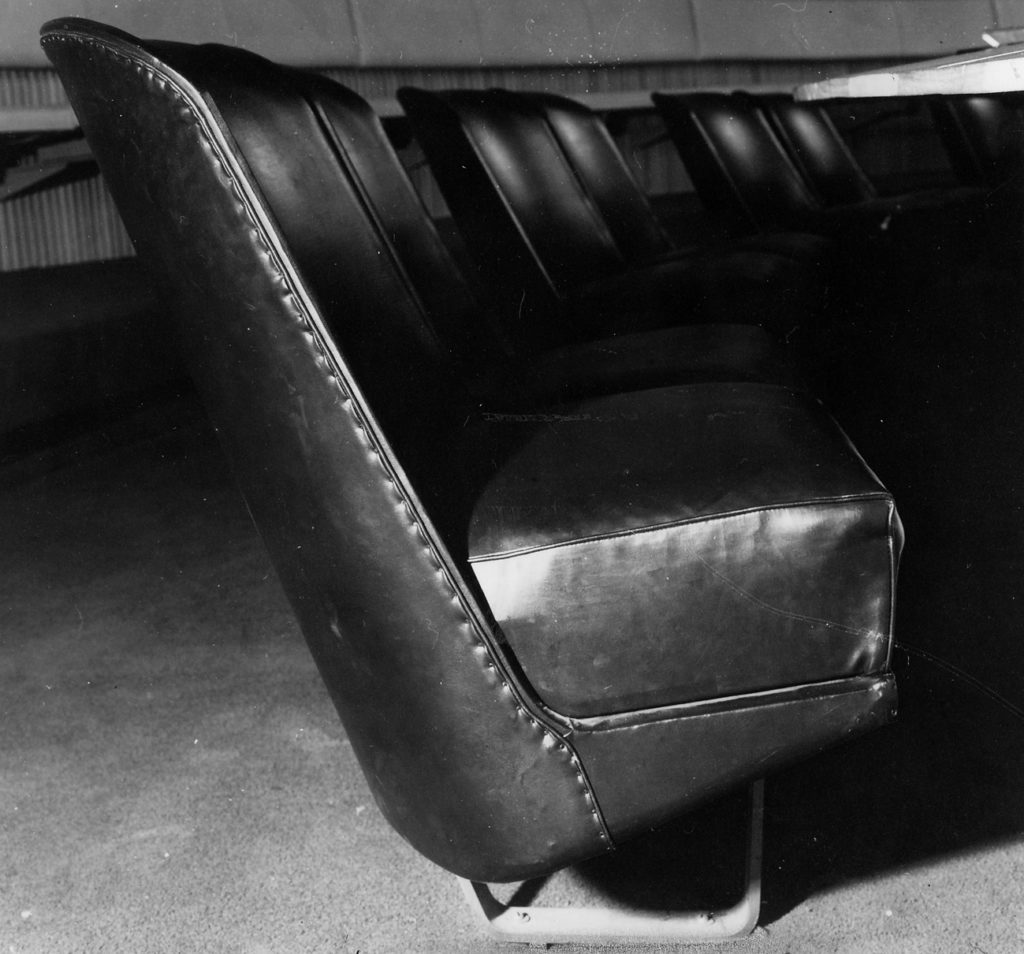 Overflow seating in the gallery above the conference room was equally tricky because the sitters’ angle of vision was slightly below horizontal, requiring the seat angle to be a little more forward of what was regarded as an optimum comfort angle. 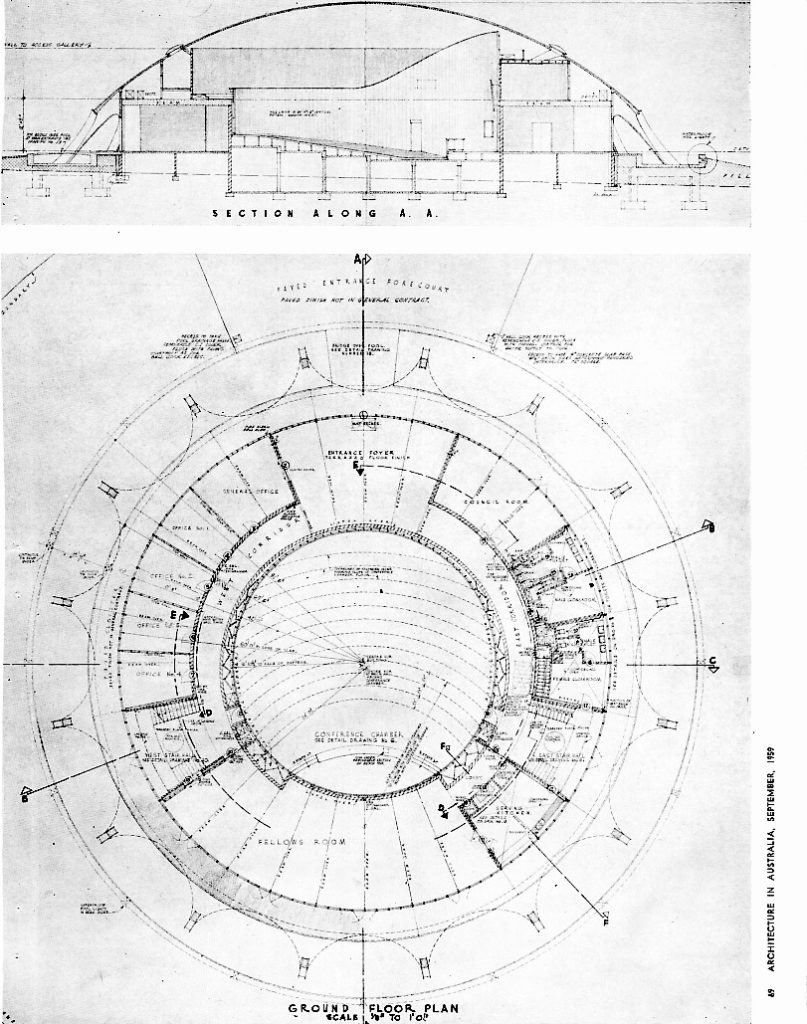 This plan and section of the Academy building give some idea of the complexity of placing two-seater settee units on the saucer shaped floor of the Conference Chamber. To ensure that all members of the audience could view centre stage without developing a ‘crick in the neck’ (ie. looking sideways for up to 3 hours) meant that every unit (made with a consistently level base) would require

a slightly different fixing height. Not only that there were two rectangular holes under each base that had to be cut for the return air to enter the plenum space below and this could only be cut when the final position of the settee had been fixed. Then the carpet had to be laid and holes cut before the final fixing of the settees.

In comparison to the rigid precision of the circular and radial location of the walls the seating location was almost entirely based on setting out by eye to reduce and eliminate visual anomalies when viewed from the centre stage position. It was a slow process and caused quite a few headaches. It required designer supervision on site rather than preparing a drawing for the contractor to follow.

It was an unusual job, but it all worked out in the end.