A typical lecture theatre fixed desk top with loose chairs – a design brought about partly by the ACT Fire Chief and me. He thought the Aristoc stock fixed arrangement of tip up seats with lift up writing tablets was a real fire hazard and I didn’t like them because latecomers wanting to get to an empty seat in the middle could not do so because of requiring so many people to stand up to provide access. In addition, the fixed top was by far the cheapest way of providing writing space and the Universities Commission that made the furnishing grants for new buildings did not pay for extravagance. 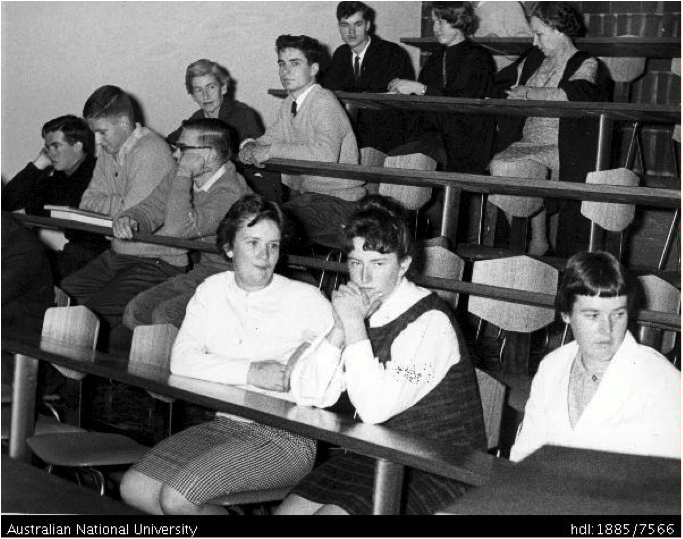 This system of fixed writing benches and loose chairs was designed by me, with working drawings by Gerald Easden in the ANU Design Unit for the SGS Chemistry or the Physics lecture theatres. Bolder iterations continued in Geology, Psychology, Botany and Zoology in the following years. The architects were Eggleston MacDonald and Secomb, Melbourne and Robin Boyd with whom we collaborated well on optics of projected teaching, lighting, acoustics as well as furniture and carpet.

The chairs were to be as noiseless as possible, as small as practicable to allow minimum spacing sideways and minimum depth to allow rear access, comfortable seat and backrest providing lumber support but with a little spring to give pressure adjustment and with ‘sled’ legs to allow easy and soundless movement backward and forward on carpet to suit individuals – and of course economical in price and as elegant and maintenance free as possible. They are still in use after 55 years of rough student use.

No commercial chair met this rigorous specification so it had to be designed within the limits of techniques which industry could confidently tender on competitively.

The CST 118 chair was a most successful chair and met all requirements, but had to be made in Sydney as no firm in Canberra was geared up to meet this need.

Viewers may recall that the very successful Hille polypropylene moulded shell chair designed by Robin Day did not appear on the UK market until 1963 and in Australia polypropylene chairs were first produced by Harry Sebel in the late 1960s, followed by Namco a little later.

The spacing between columns started at about 2m and by iteration over a few lecture theatres became as much as 4m, making it a very economical design. The CST 118 chair with sled bases on carpet were as silent in use as possible and allowed an adjustable distance between body and desk to suit all students. Importantly the system allowed access behind the chairs for latecomers or any student wishing to get out or for emergency egress in case of fire. It was both economical, safe, quiet, comfortable and accessible. This system saved quite a lot of capital money. 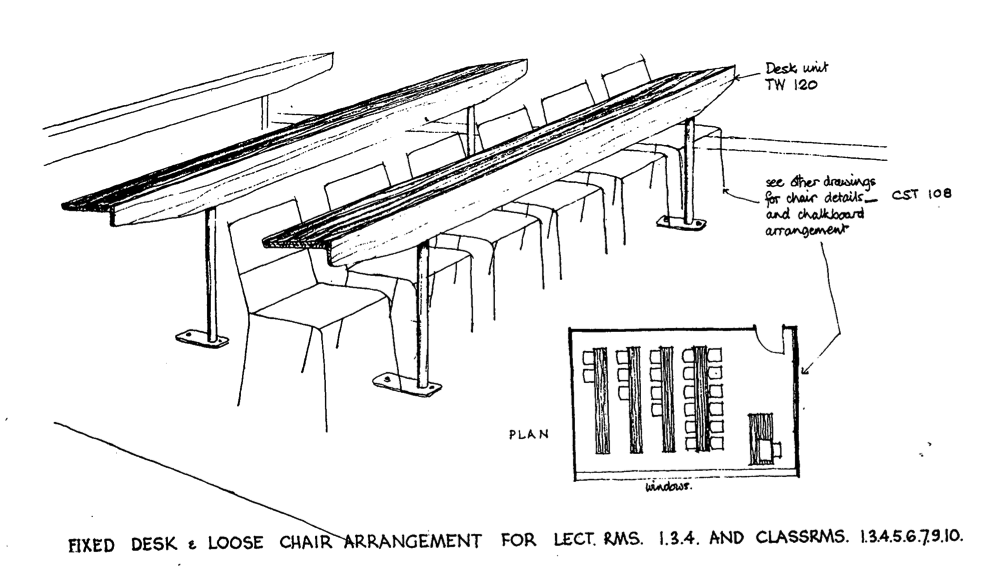