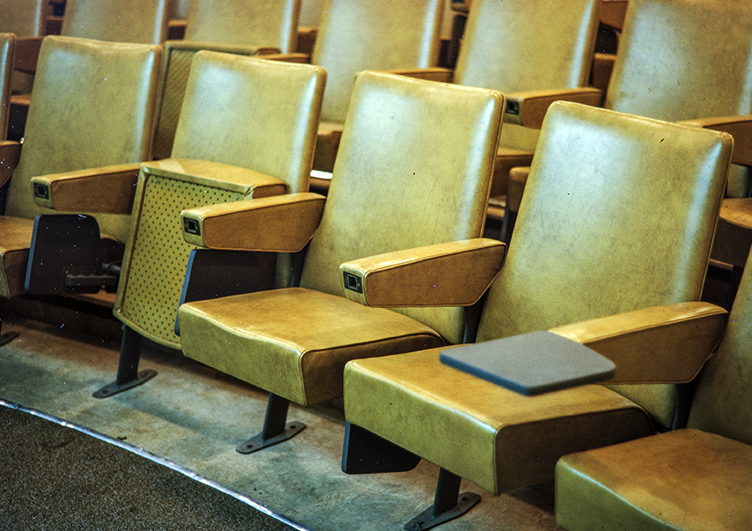 A. The row spacing was larger than usual in theatres to allow easy lateral access for latecomers and for emergency exit and to provide seats in the centre instead of the usual centre aisle (the best viewing seating area in the theatre).

B. the raised seat had acoustic absorptive underside.

C. the detachable writing arm could be stored out of sight in two positions, (more like a normal theatre seat)

B. The writing arm ready for use.

With any operatorThe Coombs lecture theatre was a major advance in enhanced lecture productivity.

1            The chairs in the theatre made history in that they were the first introduction of ‘continental’ seating in the ACT and possibly in Australia. They were achieved by my discussions with the ACT Fire Officer to modify the fire regulations. He finally agreed with the introduction of continental or wider access to seats (back to front dimension of the lateral aisles). This move enabled the elimination of the usual central aisle which really be used for the best seats in the house for screen viewing. It also enabled us to fit more seats into a given area and was more economical.

2            The chairs were the first to combine comfortable tip-up theatre seating with writing arms which could be removed out of sight when not required.

3            It was the first lecture theatre in the ANU to have a large adjustable angle wide screen on which two or three projected images could be shown for comparable discussion by lecturers.

4            It was the first lecture theatre to have an interactive lectern from which the lecturer could control the theatre lighting and projection equipment and which could also be moved to any position in the lecturing area to suit the lecturing style. There was also voice contact with any operator in the rear biobox – a new concept at that time.

These were significant breakthroughs in any lecture theatre design in the 1960s and was all initiated by the ANU Design Unit based on my research into optimal seating arrangements for better viewing of projected visual information.

At the start of the building design the fire regulations stipulated that there should be no more than 14 seats in any one row to assist access and egress in the event of fire and more often than not the useful seating arc from the screen would be much wider than 14 seats, necessitating a central access aisle as well as the two side aisles. This was a great waste of the best viewing area and I felt that the regulations were pointing toward bad design.

I had great collaboration with the ACT Fire Chief, (name escapes me) and with the architect of the H.C.Coombs building and theatre, John Mockridge and the manufacturer of the seating Ian Howard, Managing Director of Aristoc Industries, Melbourne.

The carpet battle had already been won in previous buildings we had furnished so there was no objection to laying carpet in the Coombs Theatre which of course, helped the acoustics.

The saddest party of our work was that although we were carrying out research as a normal part of a designers’ modus operandi, my submission to have some research funds made available to the ANU Design Unit to enquire deeper into our design activities did not succeed and the same happened to my request for the ANU to build a solar house as part of its normal activity of housing ANU academics and staff. That was in

Again, despite all my research into the better working of a lecture theatre not once did we ever have any compliments paid about the quality of our work. We had our personal knowledge that we provided better conditions – physically, aesthetically and economically- but somehow it never seemed to stir the minds of the higher echelon in the Chancelry.

I guess we were to much ‘part of the furniture’ – taken for granted.

As I write in 2016 I hear murmurings that with all the technological development going on in the IT world it is possible that lecture theatres may become redundant and that all teaching may well be ‘on line’. We could well be on a rough ride.