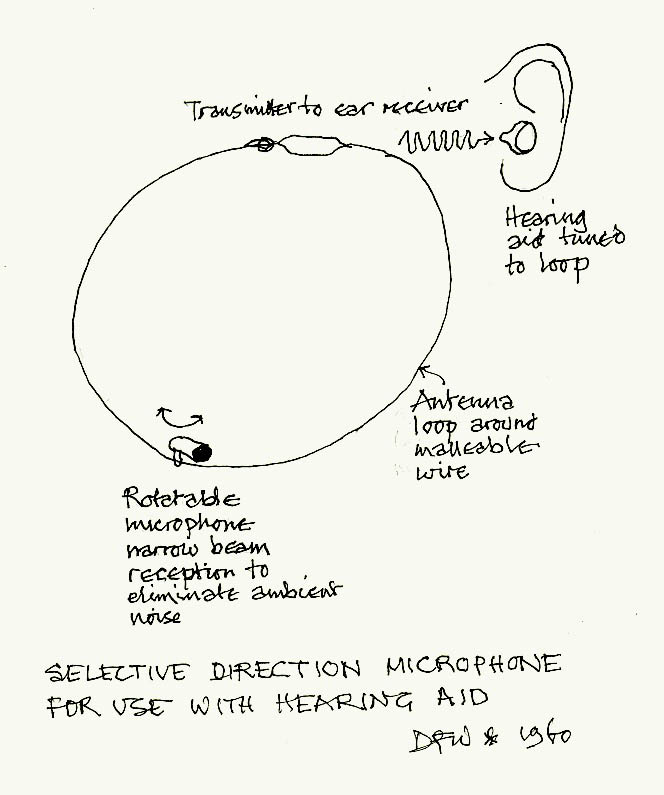 In 1928 I had a mastoid operation on my right ear which resulted in virtually complete deafness in that ear – in effect I became a person with a life-long disability.

This has been a social problem in that I feel that some people sitting on my right have spoken to me without any response from me. I suspect that this has meant that they have often felt that I purposely ignored them.

It has proved a mixed blessing in that during WW2 when I was living in Oldham and studying to be an architect I was able to sleep on my right ear without being disturbed by the air raid warnings. My disablement meant, however that I could not achieve my desire to be a Spitfire pilot or make a contribution in any of the armed forces against Hitler.

In the 1960s my good ear was showing signs of age and I found that noise in restaurants was making it difficult to hear my close dining companions, especially those on my right. I didn’t have a hearing aid at that time but thought that if I had a directional microphone that could be surreptitiously twisted L, R or centre, hung at my throat as a necklace it could be an answer. I made a sketch design and sent it to the acoustic laboratory at CSIRO for their advice on its feasibility. The reply was very discouraging but my real need for a hearing aid came around the 1990s, only to find that they were hopeless in restaurants – amplifying everything. By sheer coincidence I was sitting next to Sam Kutner at George Winston’s 80th birthday party in 2014 (also a senior TAD volunteer) who said he had an answer to my problem – making the necklace as an induction loop aerial feeding a directional signal into my hearing aid.

Sam also mentioned that he would be able to make a bone conduction aid for my right ear making it possible for me to become binaural …. Oh bliss – BUT….

….time and circumstances have intervened – other things are more important.