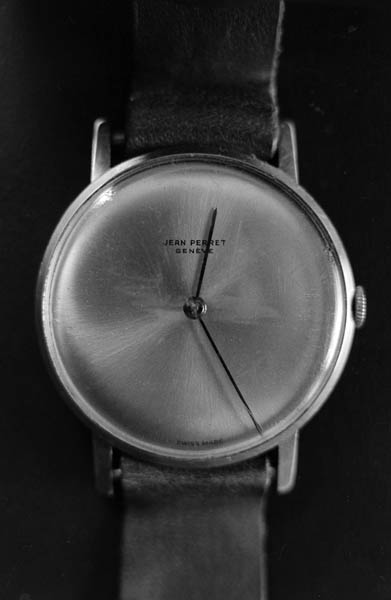 All my life I have been obsessed with the purity of design of watch and clock dials and particularly horrified at how designers decorate dials to such an extent that it interferes with the simple action of telling the time.

To me the simple differentiation between the hour and minute hand and their position related to 12noon is all we need to tell the time. Most of the time we do not need to know the exact number of minutes because a watch or clock is rarely so accurate in its setting and its action in any case. The nearest couple of minutes is usually sufficient for daily purposes.

I particularly dislike digital watches because of the mental effort required to translate numbers from say, 11.55 into the vernacular 5 to 12. The relative angles of the two hands when viewed with 12 at the top is all we really need.

My first watch I have no photo of was modified by me to remove all chapter markers and it convinced me that the simple approach was feasible.

My second watch (above) that I bought in Geneva in 1965 after trudging from shop to shop searching for conceptual purity. Most shop assistants thought I was mad until I found a tiny shop – Jean Perret – with my dream watch at a price of ₤9 – about A$18 – it could be that they wanted to sell it at cost because it had been in stock for a long time !

It required no modification by me and lasted for about 35 years. It lasted through the building of the two houses at Burra and the retrofitting of the Mawson house until around 2000 when it decided it had had enough. 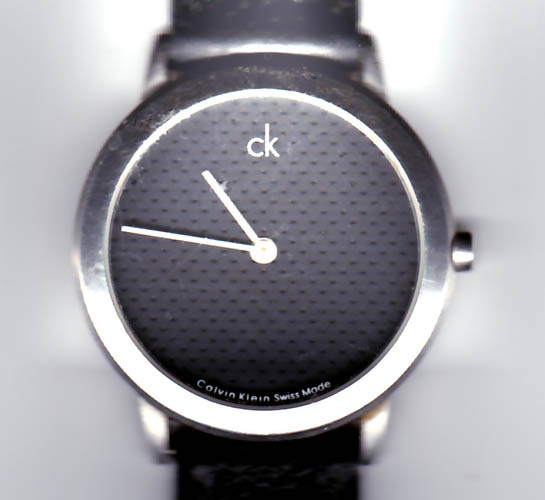 By 2000 there were a few purist watches to be seen in the Canberra shops – the idea had presumably become partially acceptable and I found this at Angus and Cootes in the Woden Plaza. But by then it had increased in value to A$350 – extra for the Calvin Klein name I suppose. I paid up and so far it has lasted 15 years. 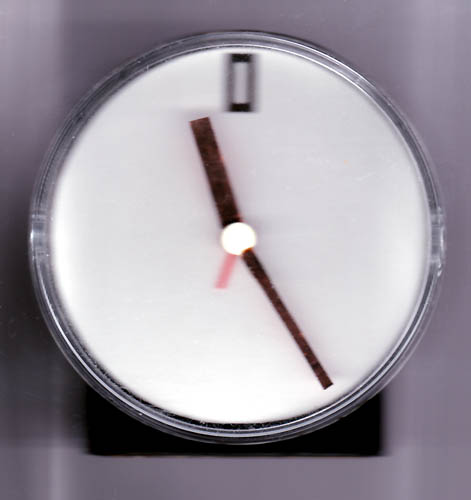 My trusty bedside alarm clock was the next victim.  The 12 marker was done on my compter and printed on thin card which was trimmed and stuck onto the dial.  The hands are card also stuck onto the existing hands and the alarm indicator was shortened and painted red.

In summary, this is a fascinating psychological area of research in which the ‘real need’ has to be assessed – how accurate does our perception have to be relative to our need to know at different moments of use ? What are the limits of angular viewing eg lying in bed at 90º to the clock ? Relative lengths and widths of the hands for rapid perception. What are our expectations? Does superficial decoration of the dial and hands play any part on the very brief functional moment we glance at a watch – less than a second !