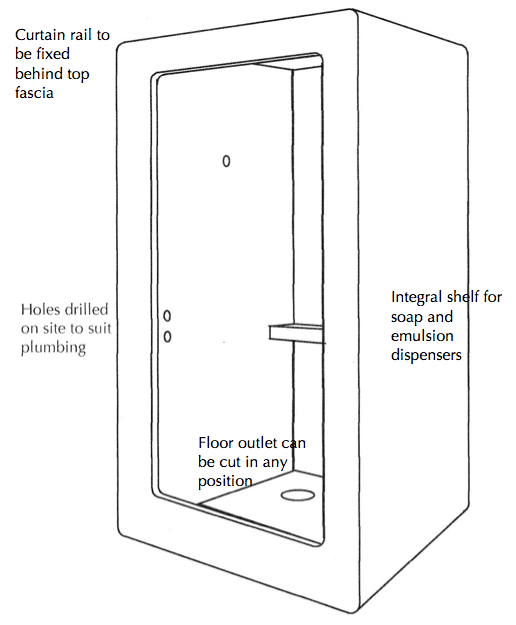 In 1953 with the new availability of polyester resin and fibreglass chopped strand matting I made the experimental occasional chair at my Deewhy house (OB2) -described under Furniture ~ 1953.

At around the same time I thought that fibreglass was a good material which made possible the production of a single unit, jointless shower cubicle which offered the possibility of a much cheaper unit in many situations – tiling is an expensive surface and joints become troublesome with age.

I made a model at the workshop of the School of Architecture, Univ.of NSW, where I was working at the time and cast a single prototype shell at home.

Its value lay in quantity production and I remember taking the model to the ICI offices in Dowling Street, Sydney to discuss its potential. There was polite interest but no offer to take the matter further – and there the matter died. I was, as usual with some of my ideas, too far ahead of market acceptance (and risk-averse management) and now the concept is well accepted. Was my concept the first ?

It was particularly suited to the caravan market because of its lightness, easy fixing and low cost.

Fibreglass was the only plastics medium available to me to trial the concept in 1953 but other plastics such as styrene are likely to be more suitable, giving a smoother, more easily cleaned, soap resistant interior surface.