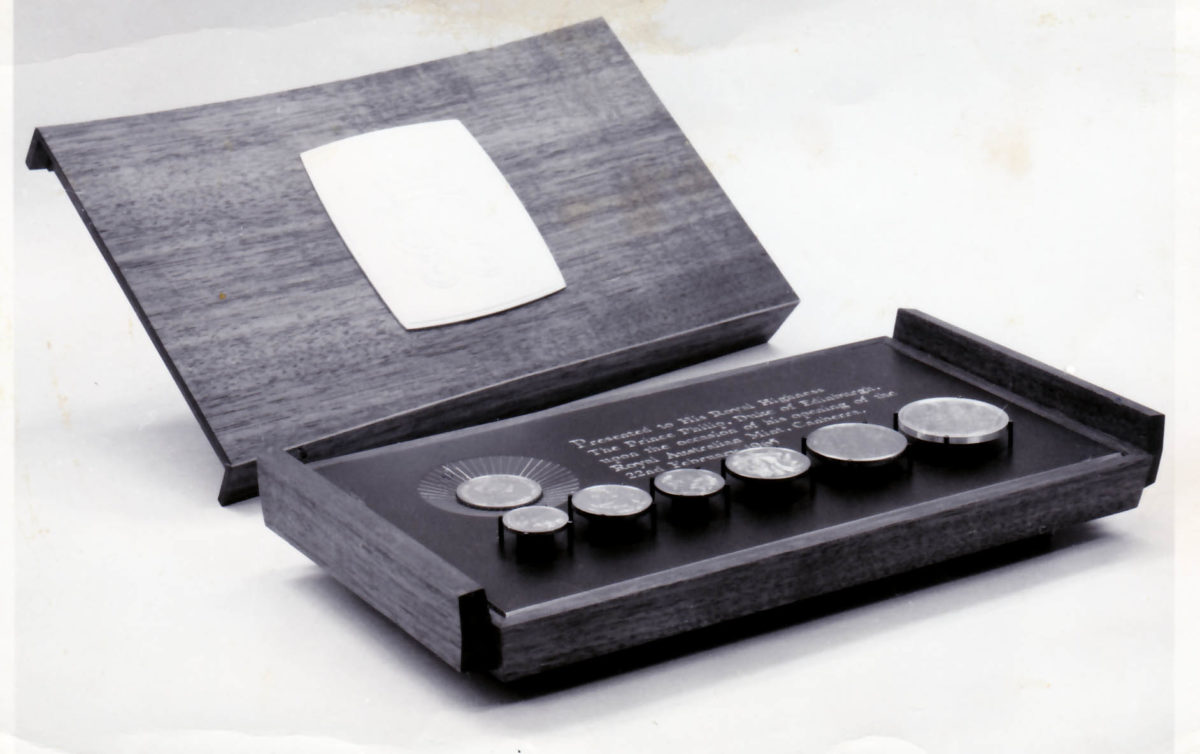 HRH Prince Philip, Duke of Edinburgh opened the new building of the Royal Australian Mint in Canberra in 1965. Along with the graphics for the opening I was asked to design a presentation box for a complete set of the new decimal coins.

One of the pleasures of being a designer is the wide variety of people you get to meet and also the challenges they usually bring with them – challenges out of the ordinary which take your brain right back to first principles – away from the lazy comfort and safety of precedents – where failure of design and delivery on time are never an option.

Although I had little to do with the introduction of decimal coinage in 1966 other than help with the opening of the Mint in Canberra (see p 1 above and the graphics for the opening – see Graphics entry 1965) Maxine and I were invited to the exhibition celebration in Sydney. We met the Governor Glenn Stevens, Lynn White (daughter of Gordon Andrews, who I knew in the 1950s), and Guy Warren (bottom right) who worked with Gordon on the artwork for the notes. 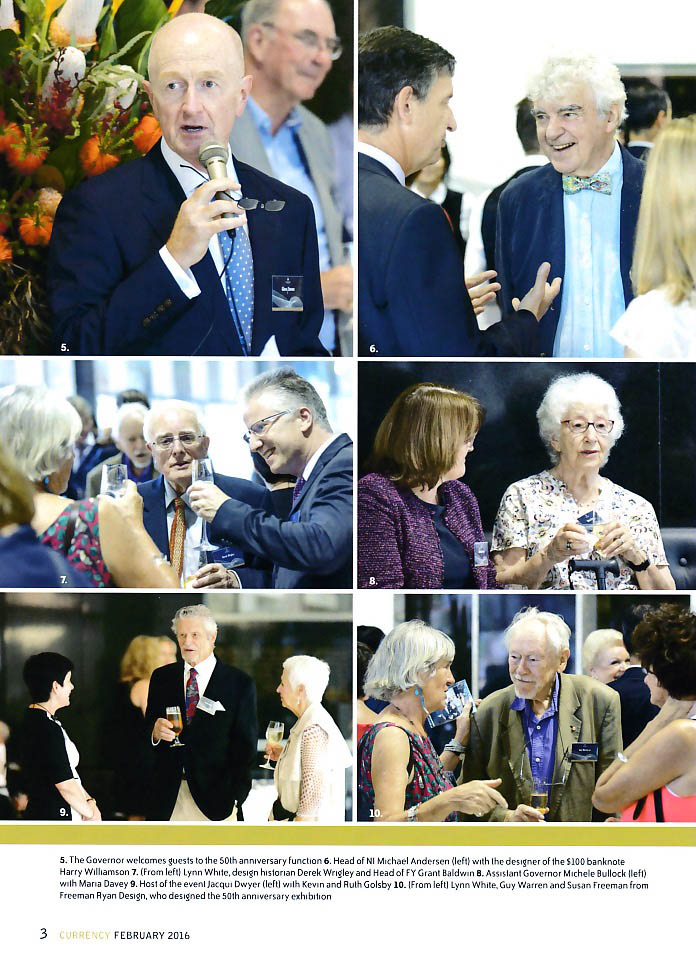 I knew Gordon Andrews in the early 1950s when we were considering the formation of the Society of Designers for Industry and also the Industrial Design Council of Australia. It was good to meet his daughter Lynn at the anniversary of the decimal currency. I also had a brief discussion with the RBA Governor which resulted in an invitation to me to write in to him initiating public access to the RBA artworks collection – see below……

Governor of the Reserve Bank of Australia

Thank you for the opportunity to view the 50th Anniversary exhibition on 12 February.

I found it of great educational interest because it clearly showed that the process of designing our currency played such a critical role in its ultimate success.  It also enabled me to meet the designers Guy Warren and Harry Williamson and to renew my association with two of your staff, Jacqui Dwyer and Virginia MacDonald. They were both extremely helpful in facilitating my photography of Fred Ward’s furniture in your building when I was writing his biography.

It occurred to me during our photography session that the RBA’s wonderful collection of art works together with Ward’s bespoke furniture form a unique grouping but unfortunately are not normally available to the public. I hope you will forgive me for raising this matter with you at the exhibition.

We discussed very briefly the possibility of the public being able to view the RBA collection and you kindly suggested that a note of this kind would at least put the idea on file and stimulate some consideration of such events.

If such a concept could receive your in-principle approval I would be prepared to write descriptive notes for some of the furniture items to draw attention to specific design aspects which make them as unique as the individual art works. They are examples of Ward’s most mature work, together with his last project, the National Library, undoubtedly establishing him as Australia’s most prolific, consistent designer of elegant timber furniture of the 20th century.

If this is to be a useful exercise for the benefit of future generations it would be extremely helpful if Ward’s original drawings could be located. Do you have them in archives with the names of the company which made them ? Even though the Department of Works is (I believe) now defunct they must be in safe storage somewhere.  Such unique items should have provenance documents as inevitably they will at some future time become surplus to current requirements.

If we don’t change direction we will end up where we are going.          Now is our last chance to get the future right.