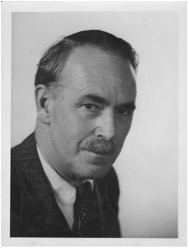 Around 1956 Fred Ward wrote to me (as Hon.Sec. SDI) inviting me to Canberra to discuss the formation of some sort of Council of Industrial Design (as in the UK). As Hon.Sec. of the NSW Chapter of the Society of Designers for Industry I had been promoting the same in Sydney and wrote to Dr H.C.Coombs, Governor of the Reserve Bank who passed my letter on to Fred in Canberra.

Briefly, this resulted in my going to live in Canberra to join Fred in the ANU Design Unit in 1957 where we both devoted some 25 years voluntary work as members of the IDCA.

It was Ross (ANU Registrar) who enabled us both to get the IDCA moving (initially at the ANU) and who had access and influence with the movers and shakers in the late 1950s – Essington Lewis, (Chairman of BHP), ‘Nugget’ Coombs, (Governor of the Reserve Bank),
Sir Walter Scott, (Management Consultant), Sir Roland Wilson, (Secretary, Commonwealth Treasury) and many captains of industry.

Fred was later awarded the Essington Lewis Award, the highest honour the IDCA could bestow ~ 1965 for his endeavours in initiating the IDCA. He served on Council for about 25 years and retired around 1975 – 80 ?

Ross was a member of Council from the beginning and became Chairman of the IDCA ~ 1970 (?). He also was awarded the Essington Lewis Award in ~ ?? for his role in promoting the IDCA .

HRH Prince Philip The Duke of Edinburgh received the third and final Essington Lewis Award for his inauguration of the annual Prince Philip Prize for the IDCA. HRH was Chief Judge of the Selection Committees. No more were awarded because it became too expensive to make. It was designed by Stuart Devlin and was a really precision piece of engineering.

I served as Honorary Secretary/Treasurer for the initial years of the IDCA and served as Chair of the Promotion and Education Committee for several years. After receiving a letter from the Independent Living Centre of Victoria (1969 ?) I initiated a joint committee within IDCA to stimulate better design of disability aids which was ultimately responsible for stimulating the formation of the ACT Technical Aid to the Disabled group in Canberra (a personal interest – see 1979 TADACT) which later initiated the formation of the ACT Independent Living Centre (both still operating in Canberra). I also chaired the ACT Committee of the IDCA for a few years and tried to stimulate the introduction of design topics into the secondary school curriculum, giving an in-service course to art and technology teachers in Canberra to show how design was the missing link between the two educational topics. Out of this arose the formation of DECA – Design in Education Council Australia which passed over to a group in NSW from where it dissolved into apathy – social changes require one person with determination to keep the vision moving forward – others do not always have that.

Two ACT members – Noeline Naar and Lola de Mar – and I meet occasionally, still fired with enthusiasm but somewhat inactive because of advancing age (I am now 92+) and somewhat despondent about the lack of understanding of the role of design in education and life generally – see pages about 1970 DECA and 2014 DECA REBORN in this section of my portfolio. I have written several pages in the last couple of years about this missing factor in education – but other critical movements demand prior attention….environment, etc.

In reviewing past history in my lifetime I can see how design has been a significant part of my activities – it is indeed a ubiquitous energy source or motivator which deserves at least equal attention as demanded by numeracy and literacy in the educational curriculum – it is a fundamental community lack which is undermining our thinking about our role in the global community.

My reader can see from the above how easy it is to digress because of the omnipresence of design in everything we do and how we cannot see the forest for all the trees – see my other ramblings about initiatives in this section of my portfolio.