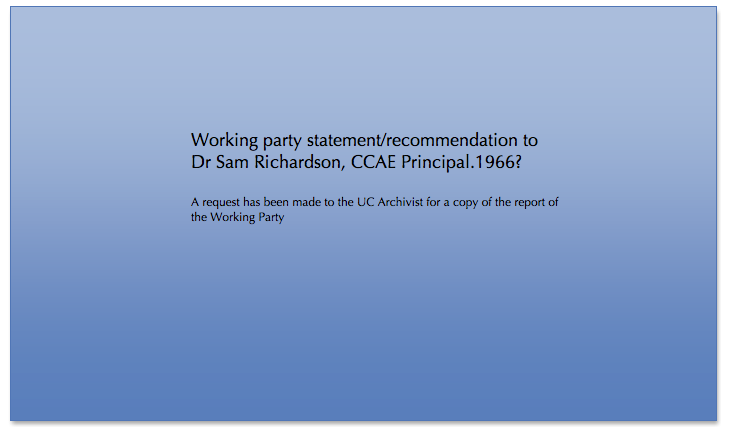 Following my 6 months round the world trip, including visits to many universities with Hilary in 1965 I initiated a proposal for a School of Environmental Design in the newly formed College of Advanced Education at Bruce. There had been one or two attempts by the RAIA to initiate a School of Architecture at the ANU with no success.

Sam Richardson, then Principal of the College was most enthusiastic about my idea for such a new design concept so at his request I formed a Working Committee including Fred Ward, David Walker, John Stevens and Arthur Robinson to establish the school with three initial departments of architecture, industrial design and landscape design with graphic design as a later addition.

It was to have a common first year in which the fundamental principles of design common to all design disciplines were to be explored with an emphasis on understanding how integrated the various areas could be in practice.

Regrettably, the 3 departmental heads seemed to ignore this and a more traditional arrangement was established. It would seem that there was no design vision beyond the status quo of establishment thinking which restricted thinking to discrete areas of thought.
It was a lost opportunity to think afresh about integrated design.

The school operates today as the Faculty of Arts and Design including the 4 departments as above plus interior design.