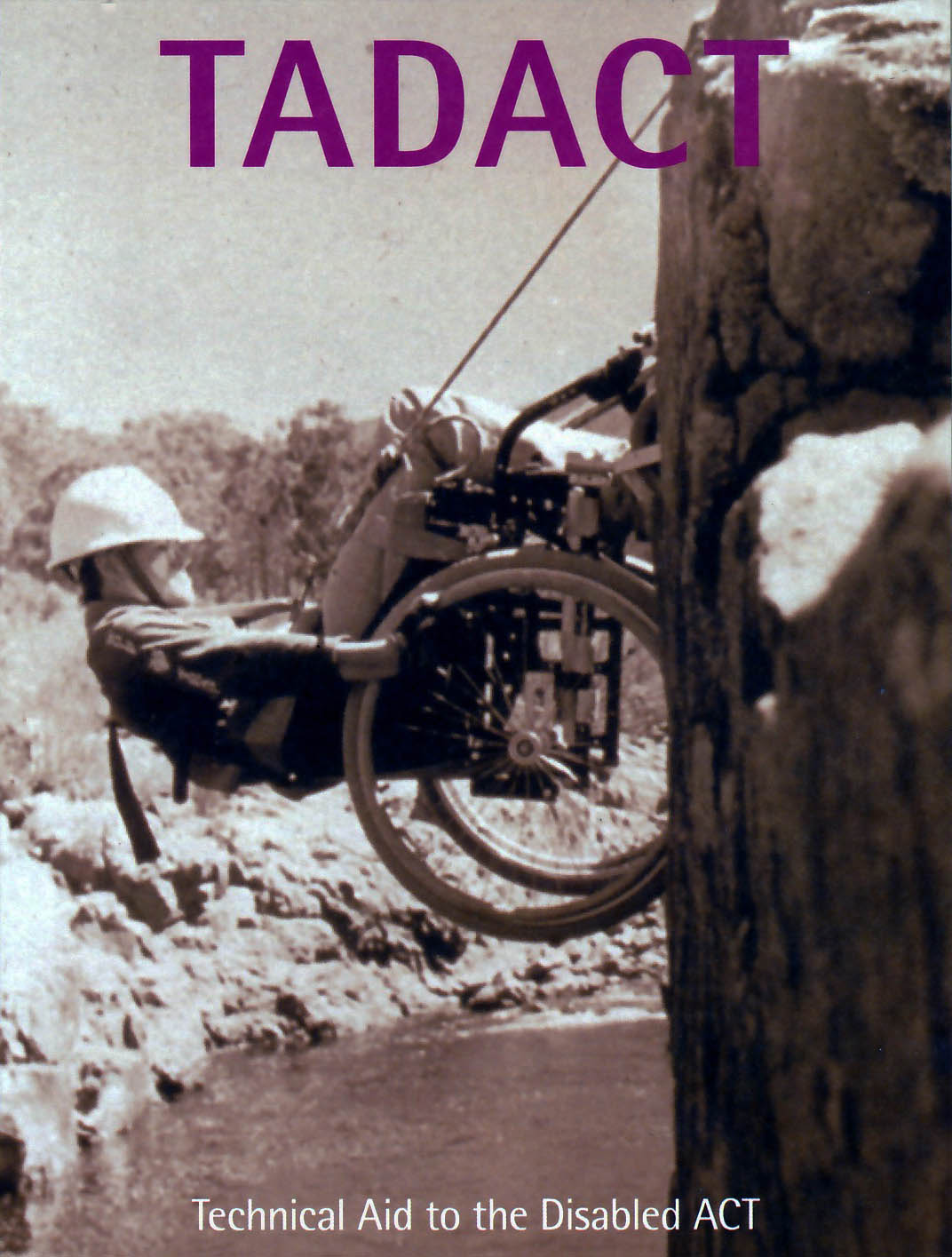 This photograph I took in 1984 (on my 60th birthday) on the vertical rock on a bend in the Snowy River very close to the Victorian border. I was on a two week rafting trip down the river with a group of American people in wheelchairs and an equivalent group of Aussie wheelriders + carers.

Prior to the trip I had made a large metal raft frame to enable two wheelriders to be secured side by side in the inflated raft
(with quick release mechanisms!) and one canoe frame – all in my Little Burra workshop.

The idea was to ride the white water rapids to provide a bit of unusual excitement for people who could not walk unaided – but unfortunately the river was unusually low and was little more than a series of puddles – quite different to the impression of a wide river seen in the photo – very much an aberration.

Our Outward Bound guides stopped at this huge vertical rock and said that all wheelriders were going to abseil down the 20m rockface into the raft waiting in the river below. Safety precautions were obeyed to the letter and virtually everybody had a go – with or without wheelchair.

It was a wonderful day – enjoyed by all once they had overcome their fear of going over the edge. The girl in the photo was an American paraplegic who was game for anything.

I was abseiling further downstream to take the photo – my first time abseiling – I loved it and had a second go !

The photo became famous and made a very suitable cover for the book on the history of TADACT – “…..the organisation that grew out of a question”

While still a member of the IDCA (and Chair of the ACT IDCA Committee) we received a letter (~1978) from Ralda Collins, Director of the Victorian Independent Living Centre asking ”why do disability aids have to be so ugly”(this was the question referred to above). This was right up my alley as a designer and I was quickly made aware of the TAD group that had been started in 1974 in Sydney by George Winston – a man who has now become my closest friend.

So our joint committee of Ralda, Mark Dohrmann and Phil Hillsdon met in Melbourne and I met George in Canberra soon after. He so enthused me about the voluntary nature of TADNSW that I initiated the ACT group of TAD in 1979. I ran it as Design1 Coordinator from the unfinished house I was building at Little Burra, with Ross Hohnen as inaugural Chairman and Glynne Jones as Publicity Director. My not-too-secret agenda was to improve the design quality of aids produced by the small group of TADACT volunteers I had gathered into our group – Laurie Knight, Charles Bartholomew, Richard Saberton, Harry Hesse and many more.

It worked beautifully for 11 years until I finally agreed with Maxine that chopping firewood in the bush at Little Burra was getting difficult for my aging body so we moved back into Canberra and I handed over a vibrant TADACT to Jim Smith in 1991 and had an overseas trip to Denmark to see my son Simon.

During those 11 years I had also started Disability Aids Collective which eventually morphed into TADACT Productions to deal with the batch production of our success stories. I also initiated the ACT Independent Living Centre around 1981 (IYDP) with Ngaire Whitehead and Judith Wimborne, both occupational therapists I had come to know through their intermittent help with TADACT projects at various times. The version on pages 8/9 of the TADACT book is insufficiently factual about its origin. 2

George and I and our wives, Jean and Maxine remain the best of friends to this day.

1 Note the use of Design rather than Technical – a word of deep significance to me but not quite understood by others. It was significant that when I resigned in 1991 the title was changed to Technical Coordinator.