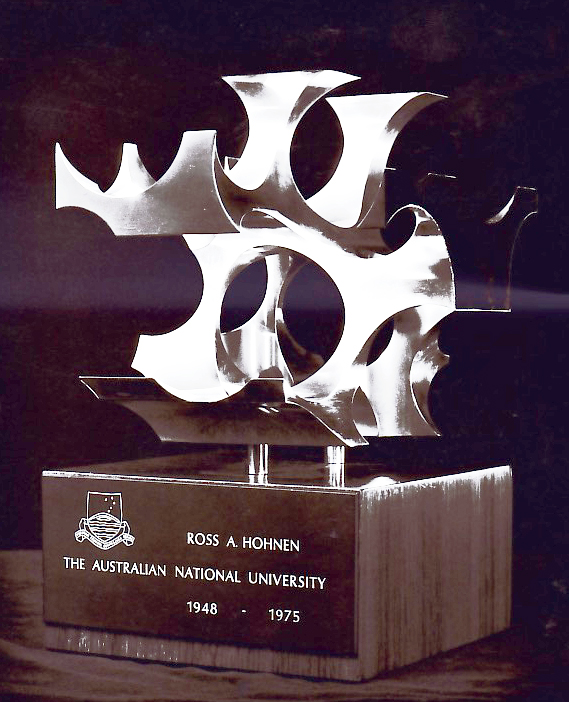 It was made on the very large boring machine in the workshop of the Research School of Physical Sciences and the wooden block base was made by Peter Darli. Ross Hohnen, Secretary to the Australian National University was presented with this sculpture, designed by me around March 1975.

Ross was a man of many interests which intersected with mine – ANU, Scouting, Industrial Design Council, Industrial Design Institute, Technical Aid to the Disabled ACT. He had a very enquiring mind which caused many respondents to think more deeply into justifying their cause.

The sculpture was made from a solid block of aluminium with large diameter holes drilled from all faces of the cube. The sculpture epitomised Ross’s usual process of boring through dense concepts put to him in conversations to reveal the truth by cutting away the fluff and waffle to reveal the essence of the remaining positive concept.

Ross clearly saw the interpretation when he received it from the Chancellor.

It gave me great pleasure to design the farewell sculpture for Ross as he was a great supporter of the ANU Design Unit and a friend to Fred Ward and me. He had that most remarkable understanding of the need for integrative design in an organisation such as the ANU. He opened many doors for us in many of our endeavours toward this end.

His retirement however, was the beginning of the end for me and the ANU Design Unit.
We were made responsible to men who did not have Ross’s vision; to men who regarded money as the sole arbiter of value and appropriateness, so I sought retirement from the ANU in 1977. The Design Unit was closed sometime later and since then the position of University Architect has not been filled. The effect of this is now clearly visible when walking around the campus to see that the external architects of new buildings have been given an inadvisably free hand without any effective guidance as to the integrity of the growing mixture of old and new.

One up to the Philistines. 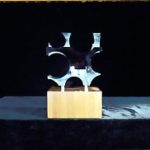 Deciding on where to drill the holes on paper was rather difficult, requiring a good deal of 3D visualisation as to how much material was left to remain structurally integrated to prove that I indeed had a valid concept. Even though I had a good visual image of what it would look like in reality I was nevertheless somewhat surprised and pleased at the result.

The initial cube can still be imagined from what is left of the six faces.

Given a chance at making another model I would like to be bolder in my sizing of the holes and their locations to explore the very minimum structure that would be possible – exciting !