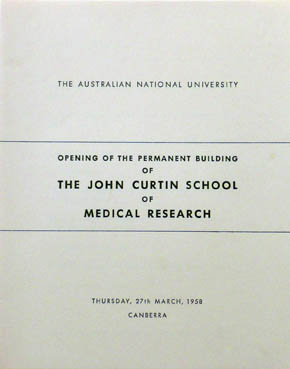 This invitation may well have been my first graphic design for ANU, along with the 1958 Annual Report. At that time the beginnings of the ANU Design Unit were becoming evident in my belief that we could really operate as a Total Design unit for such an institution, in which all matters of design were integrated to achieve some sense of unity in an institution.

This was encouraged by Ross Hohnen, then Registrar, later Secretary, but around 1970 (?) some administrator must have felt the ANU Design Unit was becoming too big and Adrian Young (ANUDU Graphics Designer) was hived off into a separate ANU entity. While this was a compliment on the success that I and Adrian had done something that was recognised as good for the ANU it nevertheless weakened the design bond that could integrate the ANU image throughout all its university efforts. Management had taken hold in the ANU and was flexing its muscles but it was ignorant of the fundamental ties that integrate.

Printed letterpress by Bill Papp, Patria Printers, Woolley St. Dickson, with whom I developed a good business relationship. He was very sympathetic to what we were doing at the ANUDU and I learned a lot from him.

I had previously done an evening typesetting course at Sydney Technical College to learn how to set lead type in a stick (the old fashioned way!). It was soon to give way to offset printing and I had to persuade Bill to adopt it as a more economical and healthier way of doing graphic work. He did change in the late 1960s – it was a huge technological change