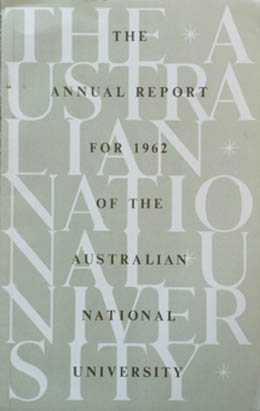 Somehow 1961 got lost, but this ends the Annual Reports I was involved with.

The graphic design load became too much for me and we appointed David Walker – also a Manchester man who had done some marvellous graphics over at Curtin University in Perth. David formed part of our team in the ANU Design Unit, complementing our other design roles showing that design was really a critical part of any university development.

It is important for the reader to realise that computers still had not arrived – we had to wait about another 20 years before they became available.