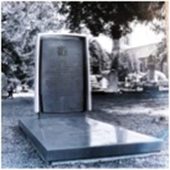 Closely situated was a contemplative concrete bench designed and placed at the same time.

The original gravestone 1961, before the addition of Lady Dunrossil’s ashes.

I can’t bear to be associated with the addition – it is so insensitive and disrespectful – don’t know who arranged it but they totally ignored the slot (seen behind it) that was purposely left at Lady Dunrossil’s request in 1962 for such a purpose. She would be horrified. Its like buying an expensive painting and adding a few brush strokes of your own (bad enough) – without discussing your intention with the original artist.

This unethical attitude is widespread and should be an educational topic. 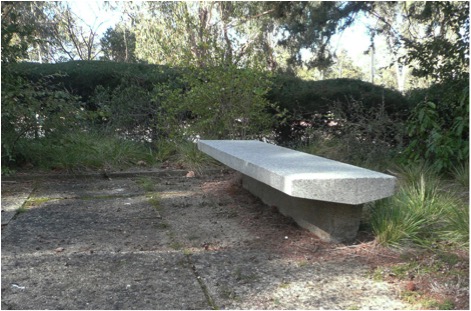 Associated contemplative seat photo near the grave in a quiet churchyard corner.

This precast concrete seat was designed at the same time as the late Governor General Viscount Dunrossil’s grave was erected in St John’s churchyard, Reid.

It was my second venture into precast concrete street furniture and I met Henry Satrapa for the first time during its manufacture; the start of a productive relationship which lasted several years, establishing a leading range of concrete furniture in Canberra and later, throughout Australia. It started at a time when street furniture was generally of very poor design and manufacturing quality and was stimulated by me at ANU and gathered strength with a request by Sir John Overall at the National Capital Development Commission for a range of good designs.

This elegant bench, however, was never repeated, which was a pity – but I did some which were rather similar. It has weathered well over 55 years. (photo taken 2015).

Concrete is a good material but tends to be somewhat ‘clunky’ and it is vital that any reinforcement has to be galvanised to prevent rust expansion failures. It does show staining from rainwater runoff but with careful design this can be minimised. Even in clean areas like the ACT this staining will still occur – I wonder if there is any connection between eucalyptus trees and their resinous exudations which results in our ‘blue’ hills – aerosols ? and possibly its oxidation and black deposits on concrete ?

Maintenance : It is a pity that the landscaping surrounding the grave and the seat is not maintained a little more appropriately. I have requested action from the Rector who, it would seem has the responsibility. (2015)