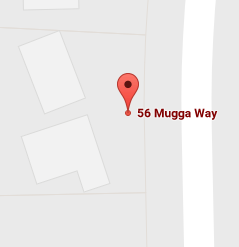 (REGRETTABLY NO GOOD PHOTOGRAPH COULD BE FOUND)

Designed for Professor John Miles (ANU Mathematics) and his wife, both Americans.

Its situation below the road level called for a house which, from a social point of view did not interfere with the long view to Pialligo from road level but neighbours on both sides eventually built two storied houses which made the Miles house look small – the penalty we were left with for trying to do the right thing of preserving good views to the northern hills when seen from the street.

It had a lovely entrance and a large fireplace similar to my house in Jansz Cresc.

Low pitched metal deck roof made it a ground hugging design – rather like the Freeman house – a sort of personal trademark.

Designed before sustainability awareness was prevalent but the northern aspect was good.

It was ahead of its time.