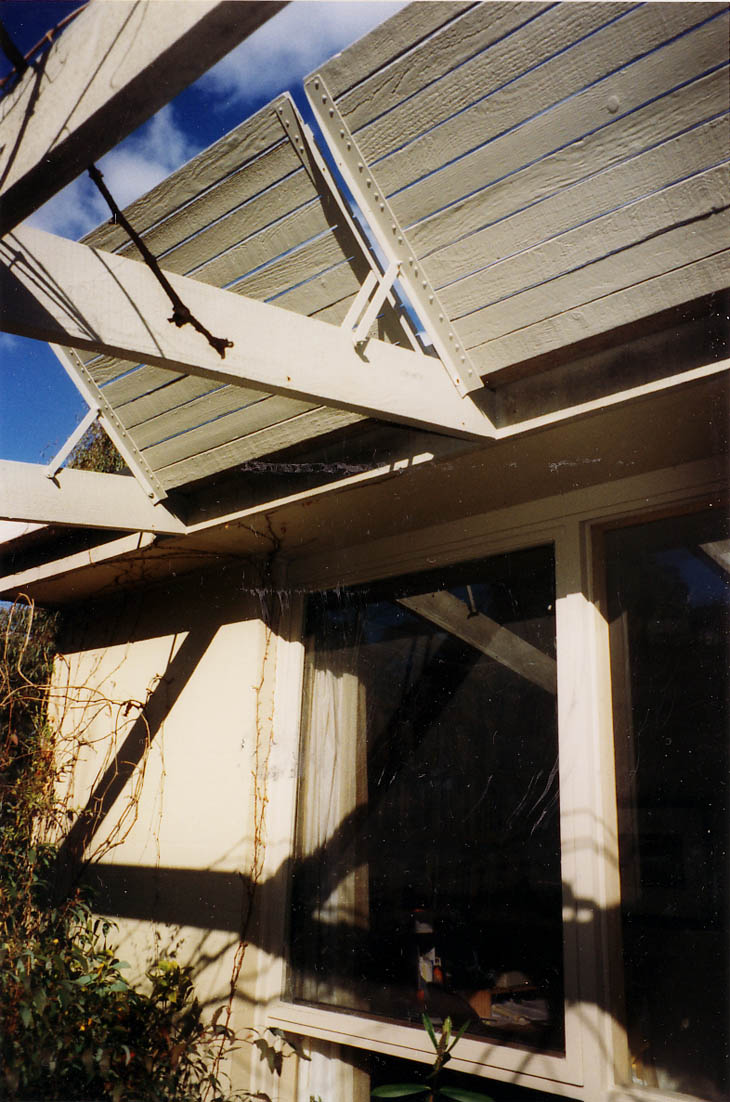 The shading of northern windows is a complex design problem and I have had several iterations since 1992. The above design (V1 before Coolaroo shadecloth became available) was an attempt to make use of the existing pergola framework and to have a shade which could drop down vertically to give some protection against bushfire heat radiation as well as summer shade protection and yet be angled upward at about 50º to allow complete winter ingress of heat and sunlight. Home made but still expensive.

The V1 model answered all those needs, but it was heavy and cumbersome to adjust and the growing garden underneath made stepladder work hazardous & tedious.

The commercial arrival of Coolaroo around 1996 enabled me to make lighter wooden frames with stretched white Coolaroo on top. The V2 model (below) revealed its magical property in that its knitted construction (not woven) enables it to refract the daylight into the room, thus reducing any need for electric lighting. The amount of daylight is increased beyond that received from the blue.

While the overhead deciduous vine (see MR 11) on the northern side of the house ensures a cool internal environment there is a need for a daylight input into the rooms in summer and the entry of sunlight and heat in winter. The vine, if allowed to close off the space up to the gutter would prevent both of these essential needs so it is trimmed back to leave about 2m of solar entry space.

Originally, the space had separate Coolaroo sunshades on wooden frames fixed by 4 loose stainless steel pins in each pergola bay (fortuitously part of the original house structure – photo above). The frames were raised to approximately 50º from the gutter in mid-April to allow the lower angle winter sun to penetrate the window and lowered to horizontal from mid-September to mid-April to allow the white Coolaroo to shade 90% of the sun’s heat yet permit penetration of the daylight portion of the sun’s energy by refraction. The refractive capacity of the Coolaroo is due to its knitted construction (most sunshade materials are woven) and this + its whiteness is the key to its success in maintaining the internal quality of the daylight without the heat. 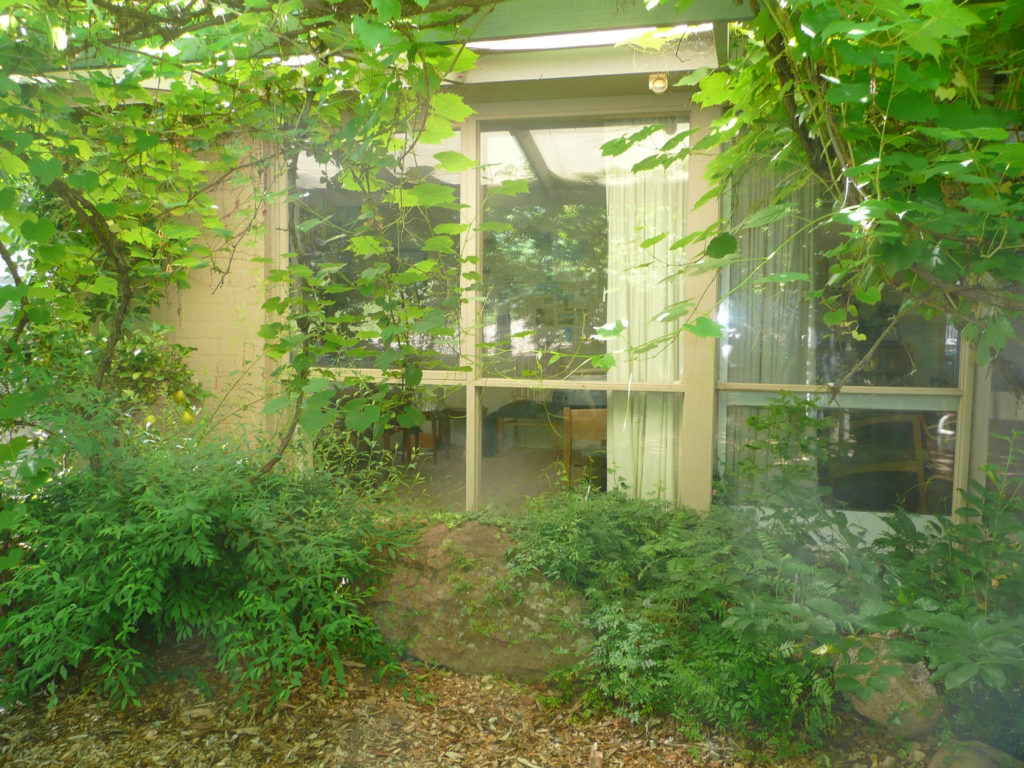 The luminosity of the sunlit Coolaroo fabric can clearly be seen in this photo. The encroaching vine on top (centre panel) shows how easily it can affect the intensity of daylight penetrating into the room. I really love this photo.

The simple wooden screen with Coolaroo stretched on top was certainly lighter than the V1 model and increased the daylight factor inside the room but it was still difficult to fit and adjust, using 4mm stainless steel rods both sides. The garden below the shades was nice to have but made adjustments very awkward using a stepladder. Also the timber frames were beginning to rot at the joints so another method had to be found. Made by me so no cost available – expensive in man-hours. I preferred not to use aluminium extrusions because of the high embodied energy and cost.

The V3 method (no photo) avoided individual frames altogether by making one complete sheet of hemmed Coolaroo with eyelets so that the sheet could be clipped on top of the pergola.

The garden below was still a problem as a stepladder was still needed, but the simplicity was attractive. At $900 for all north windows it was the cheapest solution but with my advancing age it became more and more difficult – hence solution V4….
FINALLY :

V4 is now made (2015) – a commercial solution which cost much more – individual Coolaroo blinds wrapped around a roller in each bay which can be operated by a winder stick connected to the gearbox at one end of the roller. This can be done without a stepladder. The blind is wound down and then lifted up to hooks on the beam and then tightened using the winder mechanism. See photos page 3.

When unwound the sunshade hangs down which could be useful in a bushfire situation, reducing the heat radiation in the windows – but how long the fabric will last in the heat is unknown – can’t have everything I suppose. When hanging down they will certainly be easier to scrub clean when they get some dirt accumulation. $~5500 – hopefully the last solution. A slight drawback I have found is that the tube giving stiffness to the leading edge is rather heavy and a little awkward to clip onto the hooks. They look good.