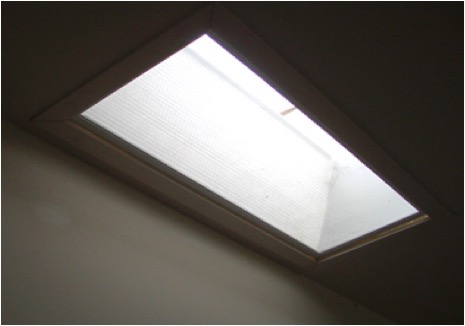 One of the 5 laylights shown open all night in summer. They are closed on windy summer days to prevent hot roof air is not blown down and all through the cooler weather so that gained solar heat is not lost. The flywire panel does not show clearly in photo.

The controlling mechanism of the buoyancy ventilation system is in the ceiling laylight – a panel of textured acrylic which rests on its back edge with its front edge lifted by a cord to form an opening which permits warm air to rise into the roof space and out the ridge vent by a buoyancy current. This is usually activated after a hot summer’s day (see Mawson Retro 1 for the process).

The laylight serves another role as a source of daylight (and moonlight) by being under a clear corrugated polycarbonate sheet inserted in the steel roofing. Heavy cardboard from Nico’s motor cycle deliveries form the reflecting sides of the light enclosure, painted white to maximise the amount of daylight entering the laylight.

The operating mechanism is heavy duty fishing line run through screw eyes in the roof framing with a pull line hanging in a convenient position and a nail in the wall to restrain its ring end to hold the flap open. Underneath the flap is a framed flywire, loosely resting on soft edging tape to reduce air leakage around the laylight framing which can easily be removed for cleaning – no screws to remove.

The system has worked extraordinarily well for 23 years – it is a cheap system to retrofit, totally silent in operation, needs no electricity to operate it. The buoyancy draught is faintly perceptible and when left open all night in summer effectively purges any accumulated heat below ceiling level and any structural absorbed neat leaving it cool for another day.

An internal temperature of 26ºC is usually the point at which I start to feel uncomfortable round about 4pm but it rarely exceeds 28ºC.