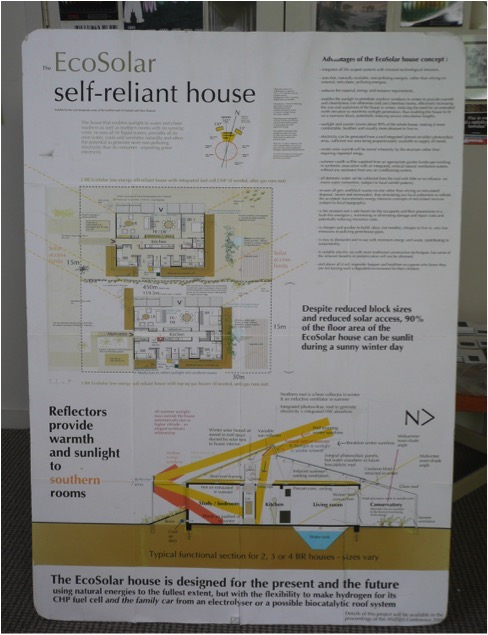 THE ECOSOLAR HOUSE CONCEPT arose from the retrofitting of 2/72 Shackleton Circuit, Mawson and the writing of my first book “Making your home sustainable”which coalesced the various concepts into a more integrated whole to produce the most sustainable house I could imagine, based on the maximisation of all that nature provides us which is freely available – even though intermittent.

I gave a paper on this to the 2006 Solar Energy Society Annual Conference in the Copland lecture theatre at ANU and also one on the Southern Reflectors, both of which received a very good hearing.

I then wrote two more books on the planning implications of making the best use of nature’s gifts – “Climate change needs housing change” followed by “Low energy affordable housing” and self published them for the Canberra market. They both sold well but to the best of my knowledge hardly any were bought by builders and developers.

There is no way that such integrated concepts can be patented or registered as everything depends on your ability to fight it in court and it isn’t worth the hassle. Far better to ‘publish and be damned’ and hope that somebody might think to say thank you and give a little credit. Experience tells me that it is a forlorn hope. What is really disappointing is the
awful realisation that the housing industry is not interested in researching and developing new ideas. Fashionable exteriors, glamorous interiors, badly oriented plans and maximum profits seem to be the main drivers. The industry is extraordinarily culpable in not helping to reduce the consumption of increasingly scarce resources or reducing the massive pollution of the globe we all live on. Apathy and greed appear to reign supreme.

See also pages 2, 3 and 4 below and entry under ARCHITECTURAL SEGMENT in this Portfolio. See 2013 Wootten house.  This display poster is in my study.

Note the FREE running costs of integrated energy concepts that can be assembled into one house. An estimate in 2006 resulted in a likely saving of around $4000 per year for the average house –   think about what savings could be made now in 2016!

But that’s the theory – putting it into practice is not easy unless someone is willing to put money into making it a reality. A colleague, Steve Wootten had a tight block in Curtin, ACT and offered to finance an EcoSolar house . We commissioned Peter Overton to act as Site Architect with me as EcoSolar Consultant.

Thermochron performance figures are still to be assessed to see if it has worked as expected but ….. 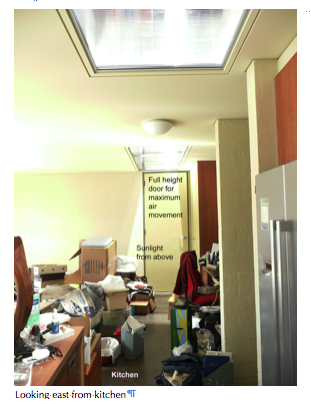 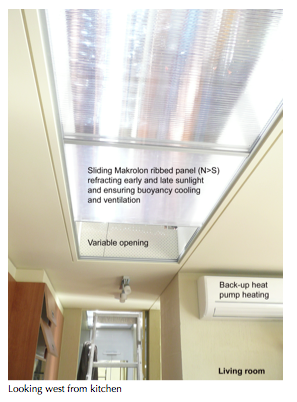 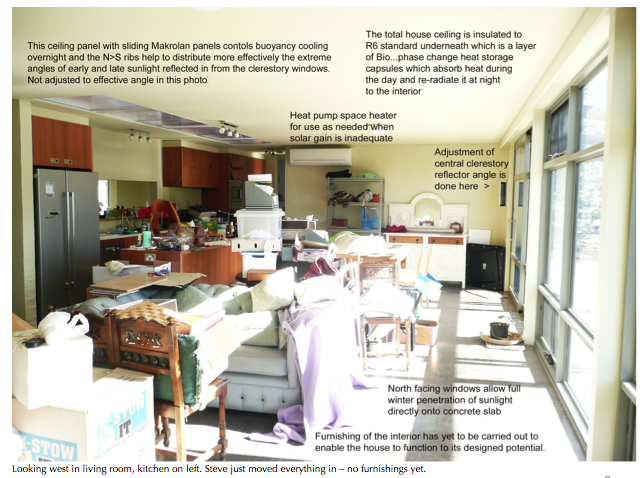 his seemingly complicated structure is really a very simple way of enabling the freely available sun on the house roof to be captured through a long set of clerestory windows with remotely operated top-hung windows (flyscreened), then reflected from a series of slightly curved polished stainless steel reflectors which can be adjusted from the living room to the right angle at any time to the kitchen or en-suite room to provide heat (in winter) and cheerfulness. 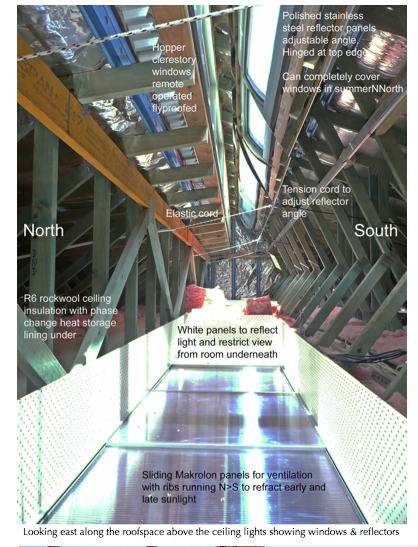 In summer, the reflectors can be pulled up close to the windows to prevent the hot sun entering the roof space without restricting any upward flow of buoyancy ventilation..

NatVent system This is a natural buoyancy system of ventilating the wholw house silently and without using any energy. The very hot days in Canberra which might require artificial cooling are few and hardly justify the expense of an air conditioner. The hopper windows are remotely controlled from the living room and as they are flyscreened there is no need to flyscreen the horizontal Makrolon panels.

Refer to poster which explains the careful relationships existing between the reflectors and the receptive openings.

WinterSun system The three large pivoting reflector panels shown below provide heat and cheering sunlight to penetrate the windows of the southern rooms. Minor angular adjustments can be made between April and September to suit the solar altitude changes but in the warm months from October to March the panels can remain vertical as the reflection will be on the ground outside the house. At this time the panels give substantial shade from the western sun at the beginning and at the end of hot sunny days. 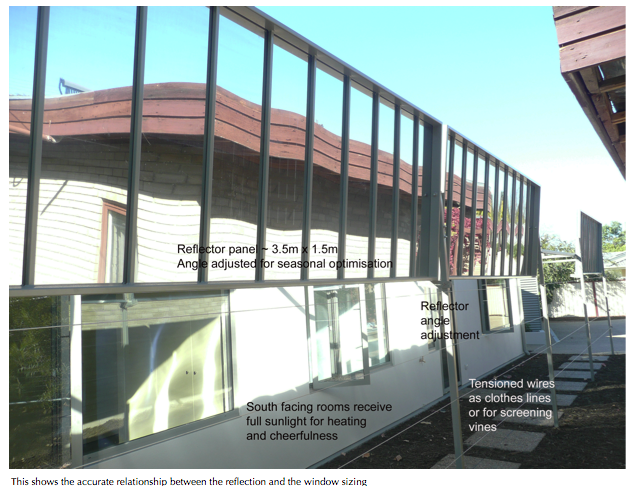