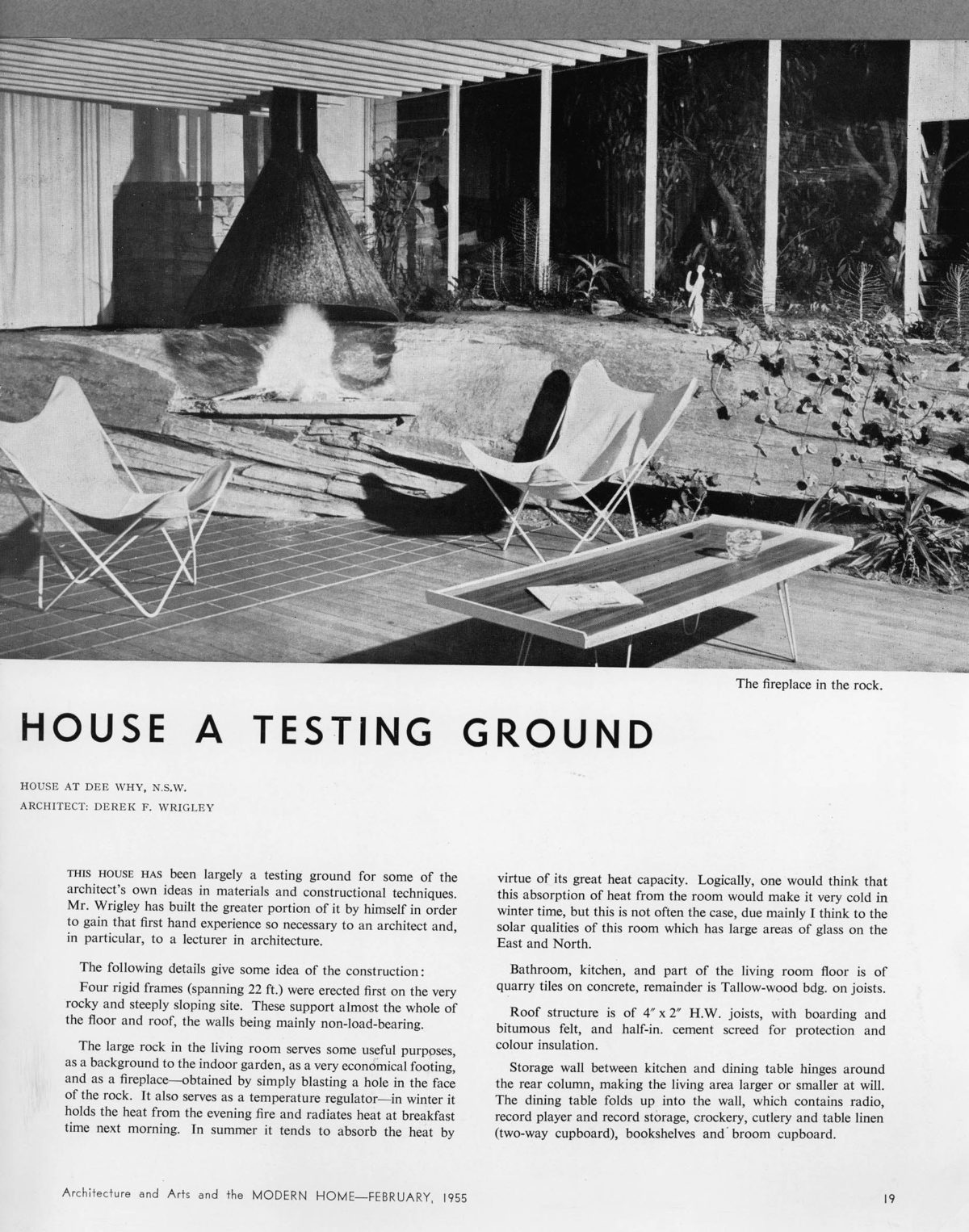 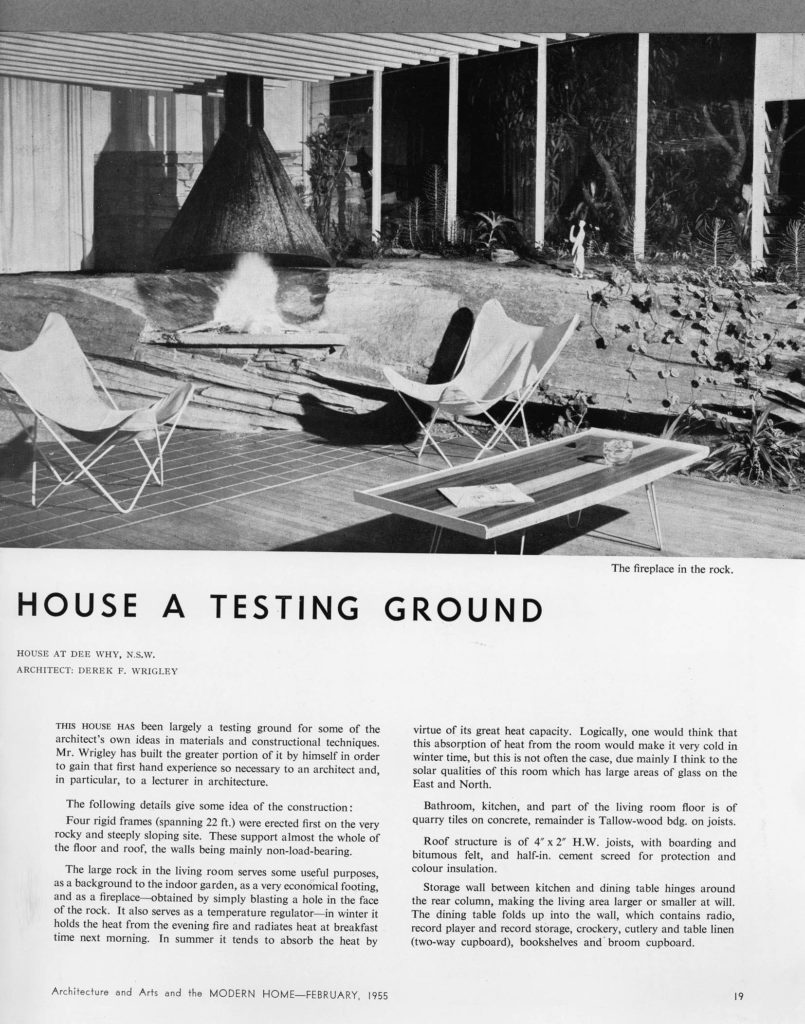 This house was built entirely by myself from 1952 – 1956 and eventually sold to John Laws the 2GB (2UE ?) broadcaster before I left to join Fred Ward at the ANU Design Unit around Christmas time 1956.

It was by no means an ideal block, being a very small pocket of steep bush on top of the quarry with no access and only low scrub.. A driveway from the first block in the quarry had to be blasted out of the quarry face – my first experience with dynamite jelly (gelignite) – cutting holes in the Hawkesbury sandstone was baptism by fire for a young architect!

The house was entirely timber with the main easterly view to the sea being the most dominant, entered from the new driveway up approx. 40 precast concrete steps which I cast during the first year of construction.

The house had a portal frame construction with ply and timber compound beams spanning the full width of the house (E-W) – a new idea for houses in those days. The huge floating rock at the NW corner was allowed to occupy that corner and a hearth for a wood fire was blasted out. The storage wall between living room and kitchen was hinged at the back portal column and with a large tyred castor at the other end enabled the wall to be moved as required. The dining table folded up into it, saving a lot of space. The large glass window on the east – approx. 3m long by 2m high ran on a ball-bearing track giving a large open view to the sea – it worked very well.

Hilary and I occupied the house after our marriage in 1954 and Adam was born in Manly Hospital in 1956. Fred Ward visited us in 1956 when we were making public comments about the need for a Design Council in Australia. He was most interested in the prototype furniture I had made and later invited me to join him in the ANU Design Unit. I was a good offer and as I was also very tired of travelling all the way to Kensington to the University of NSW we left at Christmas 1956 for Canberra to start a new life – it has proved a good move as many opportunities opened up to me.

This house was the birthplace of the NSW Chapter of the Society of Designers for Industry as some of our first meetings were held here – even without any glass in the windows.

This was quite a radical house structure at the time, arousing quite a lot of curiosity from the locals – being very different from the average house in the district. 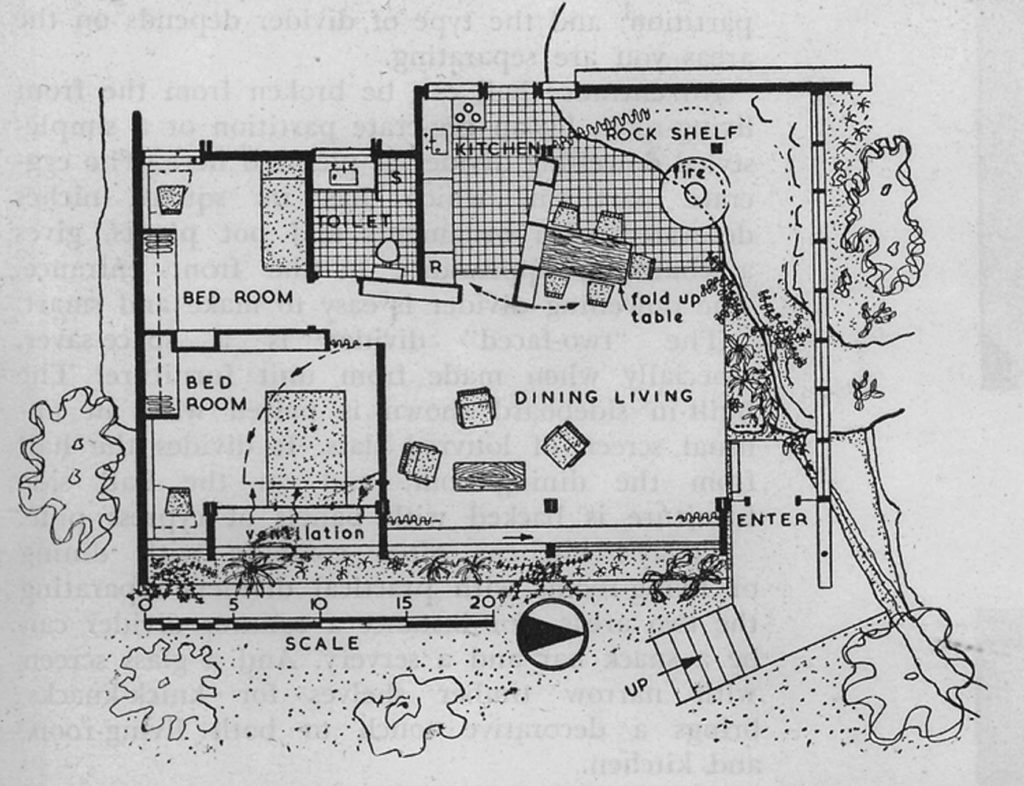 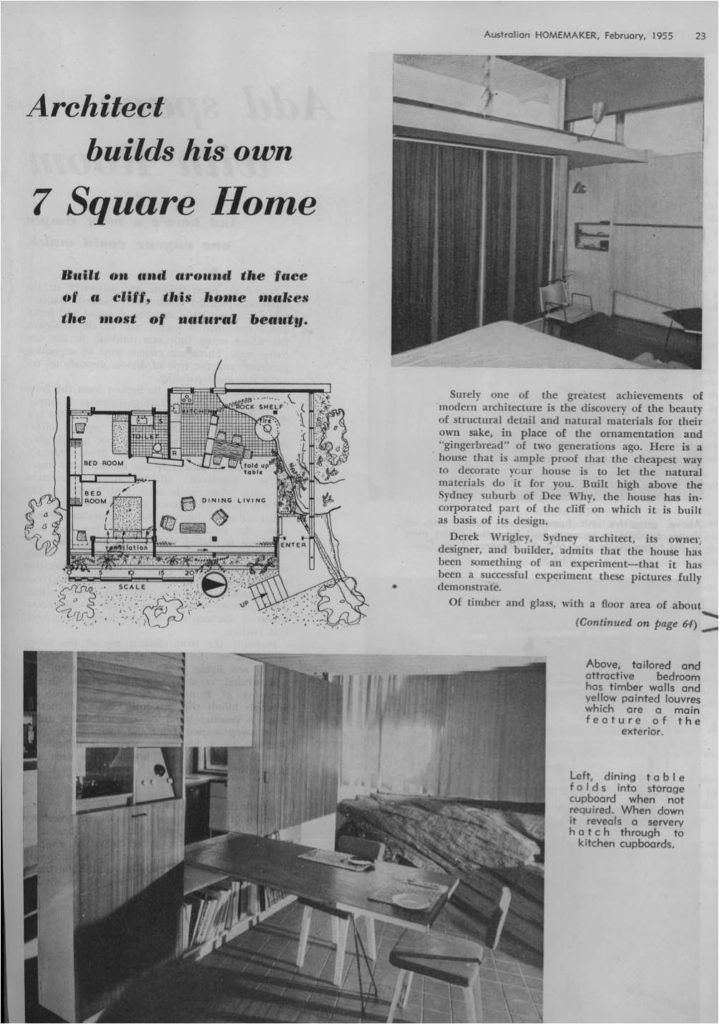 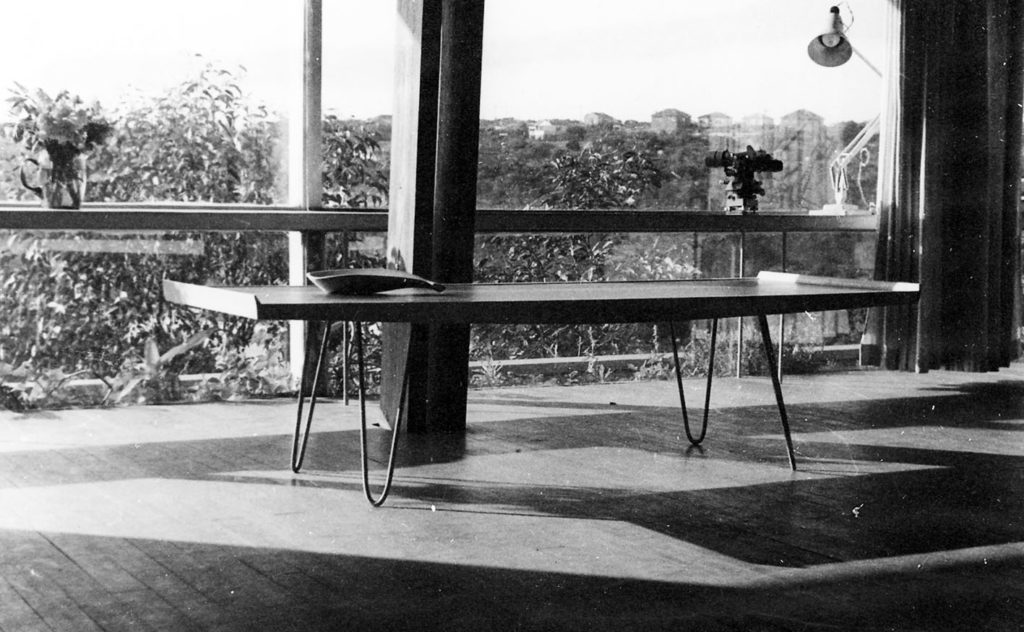 The view to the east – and the sea – was a dominant factor in the design of the house, coupled with the only access point and the minute size of the land on which to put a house.

The right hand large window was sliding on a Cowdroy ball-bearing track which had to be levelled accurately, but it all worked beautifully – it was certainly sapere aude.

The coffee table was one of my moments of relaxation into furniture making – out of necessity because it was impossible to buy good modern furniture in the shops. The hairpin legs were avante garde elements of the day but I justified this rare lapse into fashion on the grounds that they did not restrict the view. 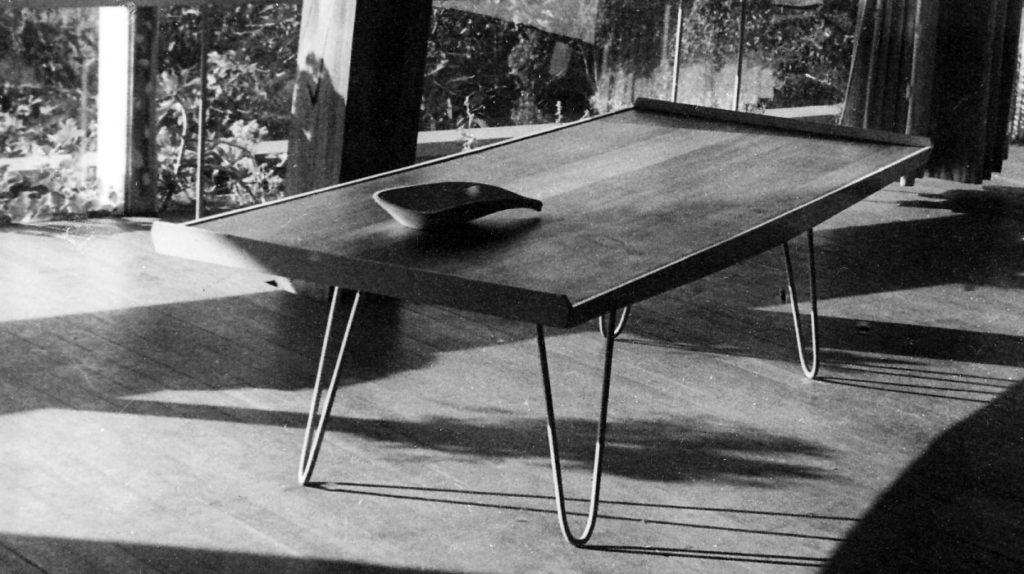 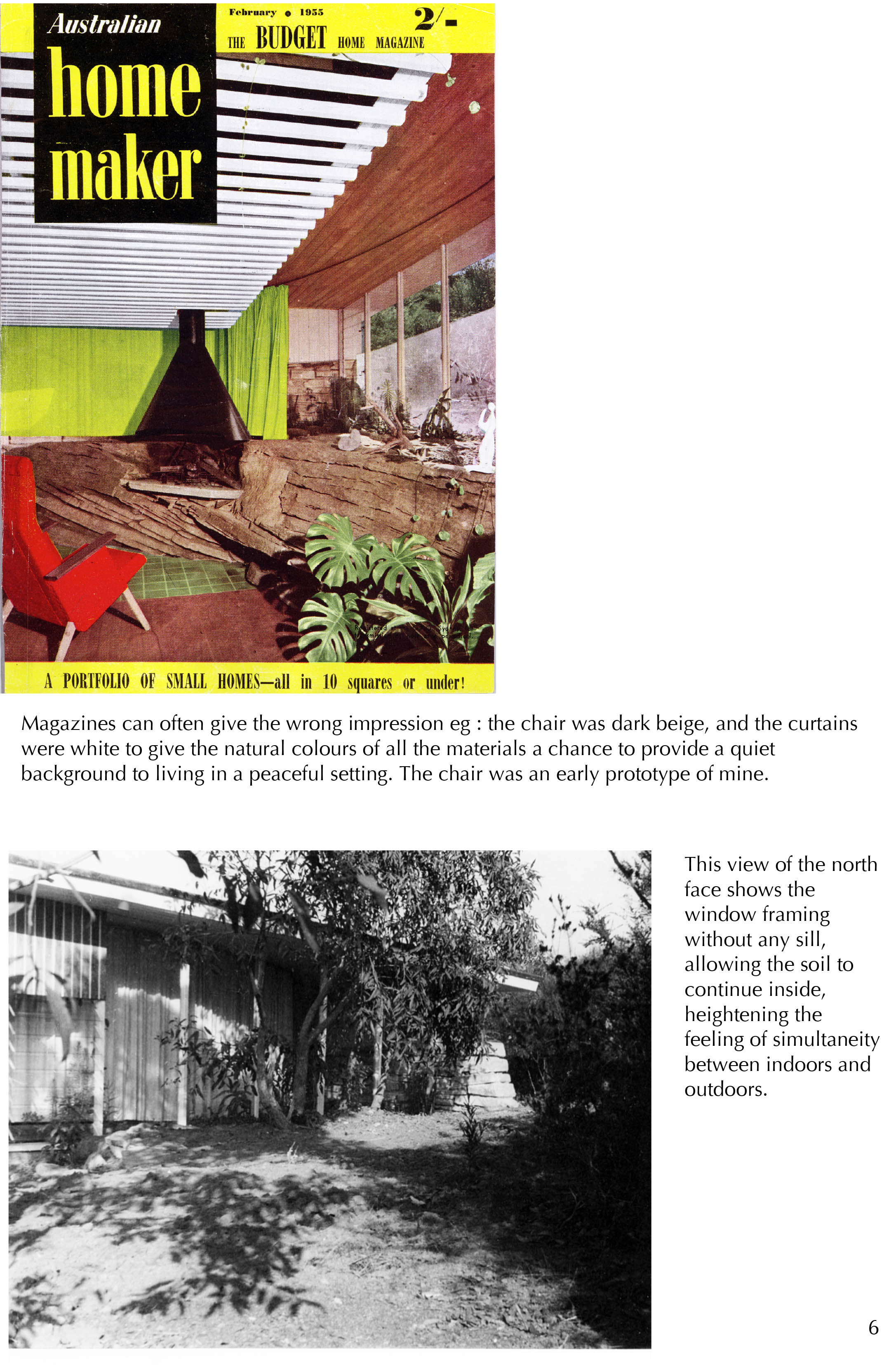 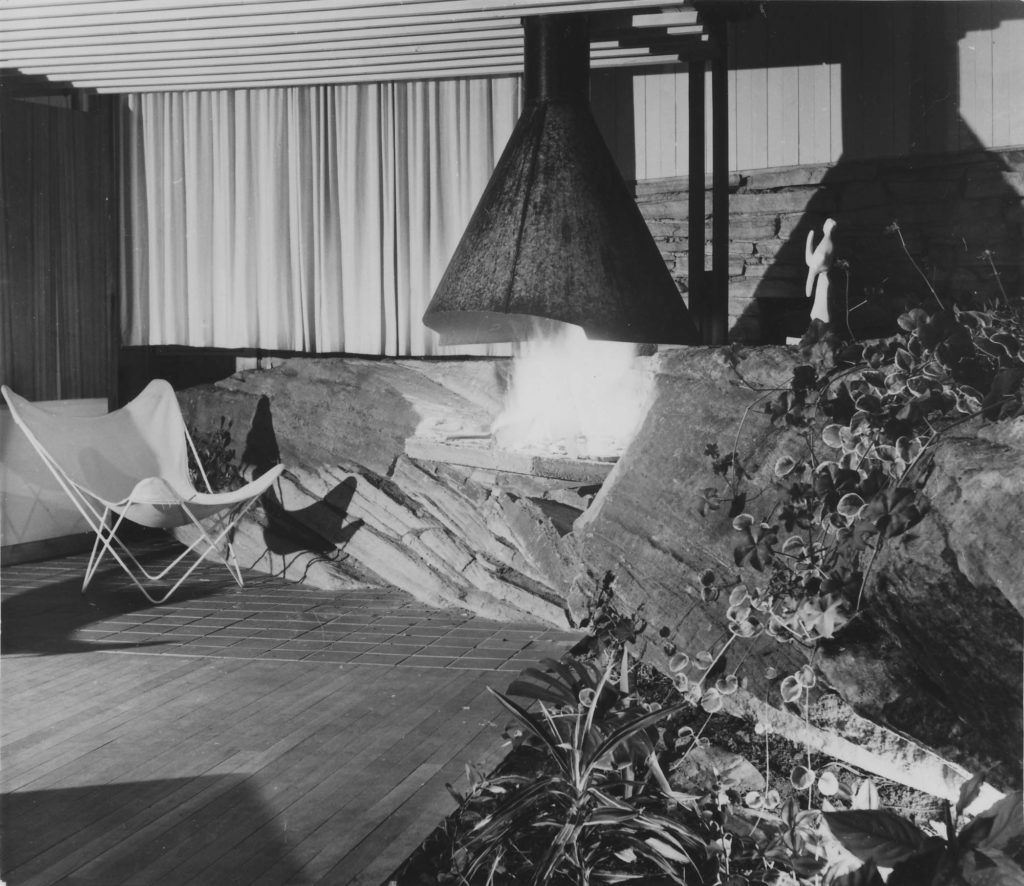 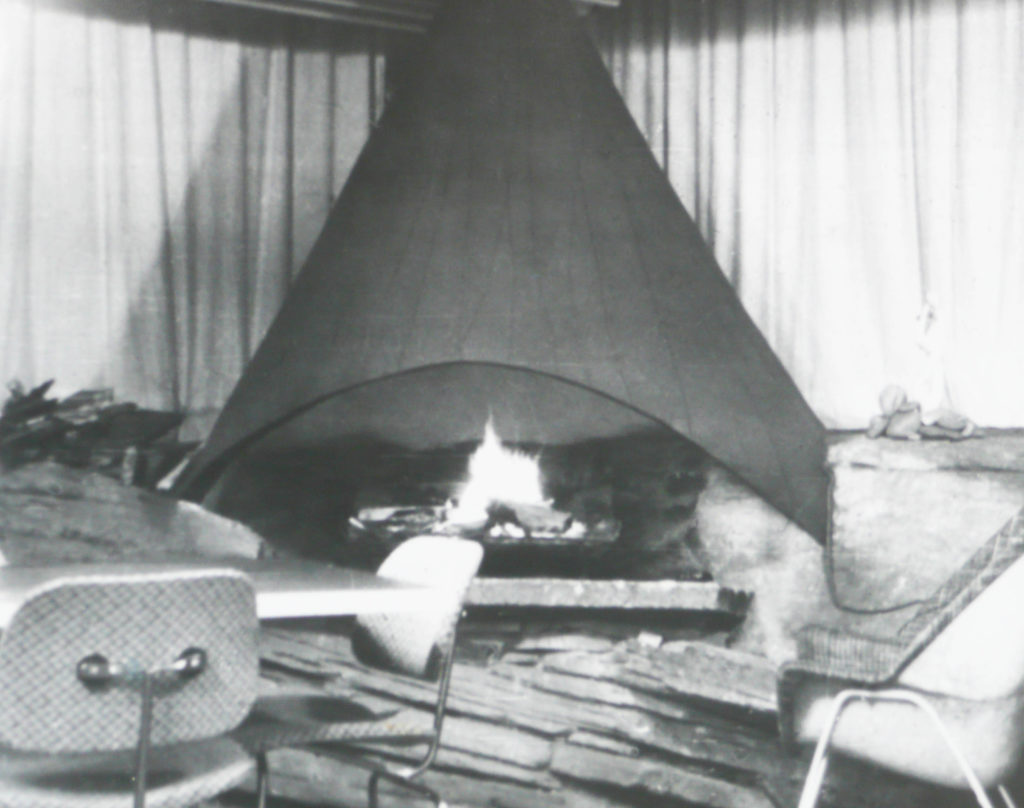 The fireplace was located in the NW corner, blasted out of a large rock ‘floater’ ledge which occupied that area of the living room – too large to move. The hearth was very economically formed in the rock by one blast of dynamiteThe steel conical flue (above) was used as the inner mould for a rendered version using chicken wire as reinforcement which enabled it to be better integrated to the stone fireplace.

The scratched lines helped to relieve the irregularities of the hand rendering. It worked well.

The prototype fibreglass chair is on the right and the DesCon Eames chairs can be seen at the dining table which folded up into the movable storage wall. In a small 700sq.ft. (65sq.m.) house every area had to have maximum flexibility.

To the right of the fireplace is my prototype fibreglass chair (1953) which, from enquiries, could lay claim to being the first fibreglass chair in Australia. (see also under Furniture 1953)

The Eames chairs were made by DesCon in Brookvale under licence from Charles Eames in US.

Viewed from 2014 this house was a, audacious, bold experiment, making the most of a tiny perch on top of a remnant bit of land above an old quarry – I can still feel and smell the sticks of gelignite !

That house taught me more than the five years I spent at my school of architecture in Manchester and perhaps epitomises more than almost any other project the motto of the Oldham coat of arms – sapere aude. (Dare to be wise – or perhaps Dare to be different ?