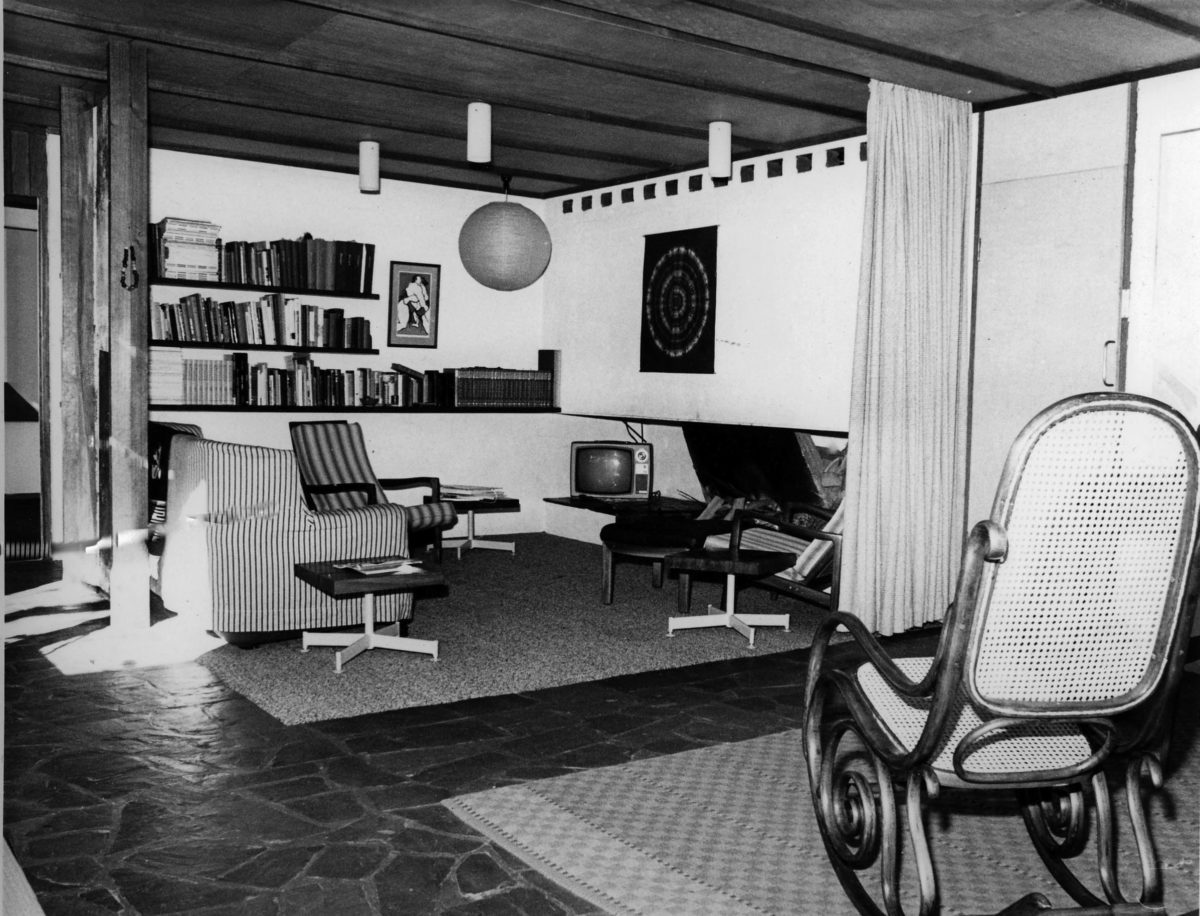 Centre of the house, slate floor, bagged brick walls, precast fireback made by me with air inlet to the outside. Warmed air outlets near ceiling level above fireplace. Striped armchairs and 3 occasional tables designed by DFW and made by Kees Westra. Special light fittings designed by DFW. Original house was built by Joe Larko, O’Connor, extension by me. Foreground rug bought in Sweden by Hilary and me and shipped home. – now in her possession as is the Thonet rocking chair.

The house was extended in the late 1960s to provide a granny flat for Hilary’s mother, a larger kitchen and a larger living room at a lower level.

Designed for Hilary, myself and Adam, our first born (1956), followed by Simon (1958) and Ben (1960). It was a compact square house, brick veneer and corrugated steel roof before the energy revolution but with its glazed entry wall facing approx. north into a brick enclosed court and a verandah facing west to the open playing field. A large fireplace had a cast concrete fireback with ample firewood storage. It was built by Joe Larko for about £6500.

It was listed on the RAIA Heritage list but owners modified it to an unrecognisable form around 2010 which was most concerning. It now looks unrecognisable and awful from the street (2014). Heating in the original house was by a Coleman oil heater and the extension had carpet with Pyrotenax heating cable in the underlay – successful but not cheap to run.

After Hilary and I separated around 1974 the house caught fire in 1976 and was rebuilt to its original design. Hilary sold the house later at a large profit and she moved to Melbourne.

The house subsequently was awarded Heritage listing by the Royal Institute of Australian Architects around 1980 as an example of the Sydney ‘movement’ (Ha !).

Around 2010 it was remodelled by the present owners but it looks so unsympathetic from the street I just can’t bear to go near it.

No reference to me of course.