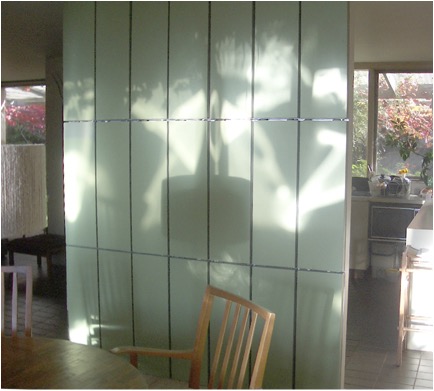 The Mawson house (being a developer’s design) had minimal insulation in the external walls and as all the internal walls were the usual stud construction there was minimal thermal mass in the structure.

The heliostat was directing substantial amounts of solar radiation into the small dining area and a lot of it was being absorbed by the stud wall facing the window.

After very careful measuring and calculations I had 21 concrete slabs cast and erected them on the face of the wall, leaving a10mm gap behind and between the slabs to allow for warm air circulation. Some panels reached a temperature of 64º from a direct reflection. The warmth can be felt on the cheek as you walk past at night but the figures below are not very encouraging.