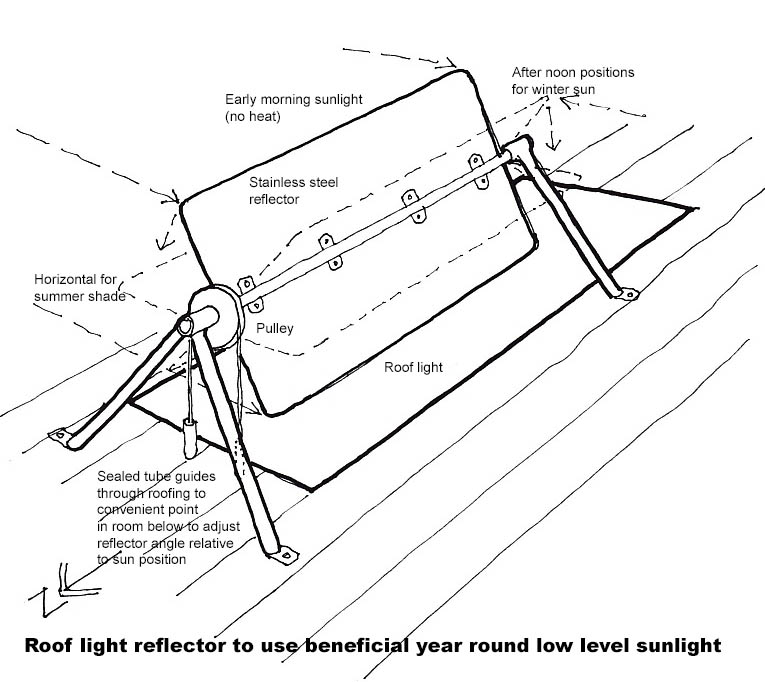 This device suggested itself for placement above the roof light in my study to reflect sunlight into my room in the early sunlit hours in winter as well as the late sunlight and also act as a sunshade to the roof light in summer. I had always been delighted by, and have commented on, the early sunlight through the eastern window in Maxine’s study on my way into my study. My study faces NNW and is devoid of sunlight until about 9.30am – comparatively cold and cheerless compared to Maxine’s room – evidence of human psychological desire (need?) for the cheering power of sunlight.

The device has a reflector a little wider than the long rectangular roof aperture mounted about 400mm above and parallel with the roof, with a pivoting N-S axis in its centre. The reflector could be turned by cable from inside to catch and reflect the sun’s rays in the early morning (all year desirably) with diminishing effect approaching noon with the reverse after noon.

In summer it could operate to reflect the early sunlight (no heat) and turned to horizontal to shade the roof light when undesirable (~ 9.30am – 6.00pm).

To this date (27 Apr 2016 aged 92) the device has not been built – my interests and equipment were elsewhere and roof work is getting physically beyond me – maybe …..