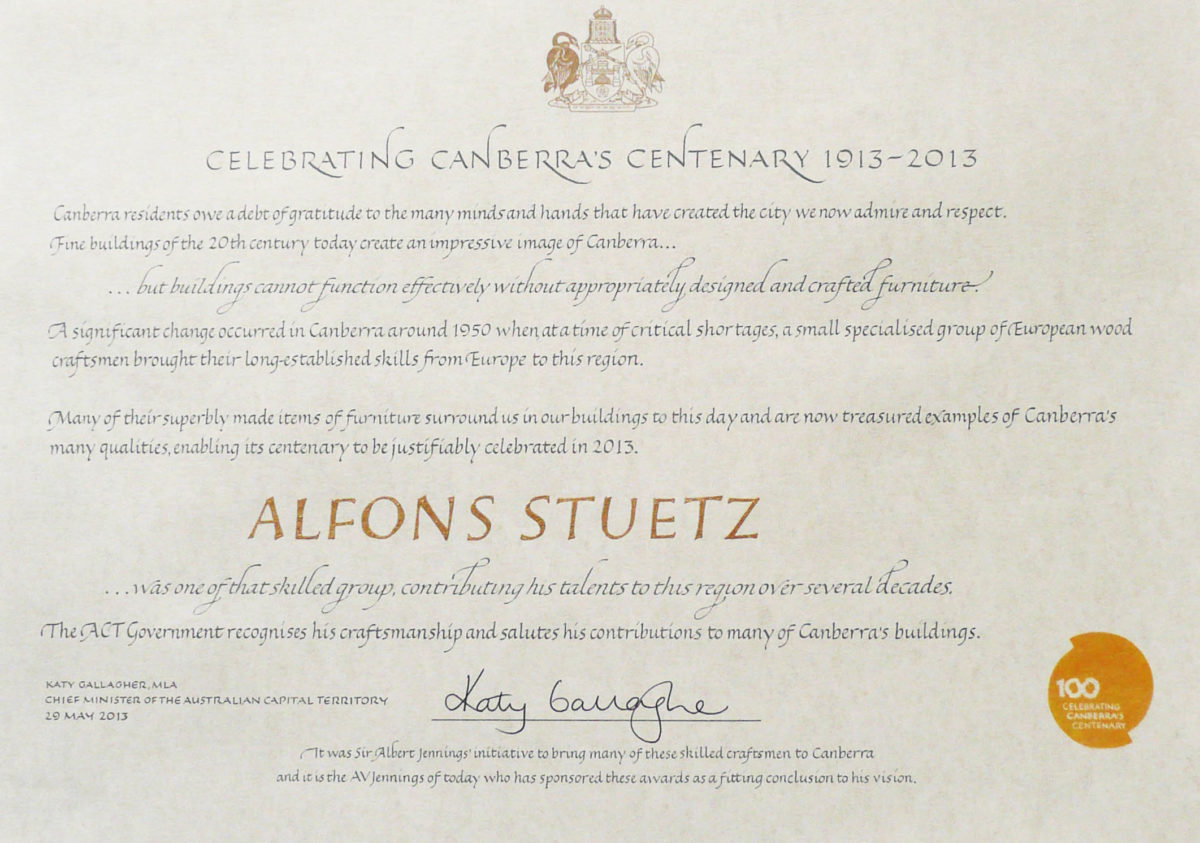 At the launching of my book about Fred Ward by Dr Martin Ward, (Fred’s son) at the Gallery of Australian Design on 1 June 2013 I felt it was particularly appropriate to recognise the few remaining “Jennings Germans” in Canberra who brought their European skills, supplying the essential quality to complement Fred’s designs and especially as it was Canberra’s Centenary year.

I found there were 8 surviving JG members around the Canberra region so I wrote the above text and invited the Chief Minister to fund the scripting and presentation of this award.

The Chief Minister agreed to sign the Certificates of Appreciation and the AVJennings company in Melbourne agreed to pay for its writing. AVJ’s Executive General Manager (NSW/Vic) Mr Alan Soutar flew from Sydney to say a few words at the book launch.
The certificates were presented by Dr Christopher Bourke MLA, representing the Chief Minister, Katy Gallagher, who thanked all the recipients for their skilled contributions to the development of Canberra since their arrival around 1950.

The certificates were designed and lettered by Gemma Black, a former Canberra resident, and one of Australia’s most skilled calligraphers (now living in Hobart).

It was significant that those who received the award played major roles in the making of Fred Ward’s furniture for the Australian National University from the early 1950s were :

Carl Cloos, Kurt Kloska, Oswald Paseka, Hans Pillig, Klaus Scharrer, Alfons Stuetz, Tony Suban, Klaus Tschorn. Other migrants to Canberra at the time may have arrived at other times and by different routes such as the Snowy Mountains Hydroelectricity Scheme were :

It is possible that I have omitted one or two others – apologies.

“Fred Ward” Derek Wrigley (a section in my book is about the contribution of Jennings Germans and the way they helped Fred).

My sister Shirley wrote an excellent media release for the opening giving a summary of Fred’s career and the Jennings German’s contribution. Refer to my Ward book files on computer and elsewhere.

There is an original certificate in my files.