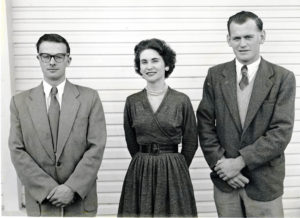 Design is a skilled process that can be applied to almost everything conceived and made by human beings. It is thus a mental process to achieve something appropriate to a particular need – but it can also be the final result – the product and its effect on users – is it beneficial or detrimental?

As a process and a result applied to an institution it provides many opportunities to take design to an even higher level by integrating the opportunities into recognisable corporate forms displaying certain similarities. This provides a final entity which is greater than the sum of its many parts and its application to my 20 years at the Australian National University provides much retrospective evidence of the potential of design in affecting the human mind.

Fred Ward was the initiator of the ANU Design Unit around 1954-5 at the invitation of the Vice Chancellor, Sir Leslie Melville, following his recognisable success in furnishing University House in 1954. Fred invited me to join him as Assistant University Designer in 1956 but the concept and potential of Total Design within an organisation was at that time unrecognised.

The spark of Design Management was, however, most likely kindled in my mind as far back as 1951 when I visited Michael Farr, a Design Management consultant practicing in London. His writings in Design – the magazine of the Council of Industrial Design (CoID) around that time were to slowly awaken the potential of design as a management tool in many British industries and was latent in my mind and also in Fred’s – otherwise why would we each devote 25 future years of our voluntary time to the initiation, development and support of the Industrial Design Council of Australia ?

Joining Fred in the ANUDU in 1957 proved to be the opportunity I needed in that the design of a university was fertile ground for an integrated approach, but it needed to be recognised and accepted by senior management, otherwise separated players of the same orchestra were playing different tunes. This acceptance by two senior ANU administrators, Ross Hohnen, then Registrar, and William Hamilton, Bursar, was in retrospect a key factor in the success of the ANU Design Unit. However, as time went on they retired and were replaced by others with quite different views on our integrated role and the fortunes of the Design Unit deteriorated, ending with my dissatisfaction and initiated retirement in 1977.

To return to 1957 – Fred’s skills in furniture design were reinforced by my trained skills in architecture and civic design which expanded by demand into campus planning, industrial design, graphics and landscape design with some specialist designers joining us as growth of student numbers increased. We came to believe that a university was not simply a place of learning and research but its very ambience had a significant and lasting role to play in impressing the value of good design on its students’ minds – a sort of osmotic learning process.

The reader should try to cast their mind back to the 1950s (if their age allows) to realise that the world at that time was quite a different place to the current 21st century. There were no computers, teaching was largely ‘chalk and talk’ with occasional monochrome slides, no overhead projectors, no television or videos, no Kodachrome 35mm colour slides, no mobile phones, no tablet arm chairs in classrooms or lecture theatres so the effective communication of knowledge was at a rather basic level. The furniture industry was equipped almost exclusively for the domestic market and was still recovering from the effects of WW2 with no specialisation to cater for the real needs of tertiary institutions.

The growing demand for tertiary learning meant that staff and student needs could not be satisfied from stock commercial products, especially furniture. Hence the initial need for the ANU Design Unit which not only met the needs of ANU but in later years was called on to help other universities – Sydney Uni., Uni. of New England, Uni. of Adelaide and even as far as Cambridge, UK. (Churchill College).

Technology did, however, benefit greatly from the stimulus of WW2, particularly in electronics and optics, both of which were appropriate for improving teaching in lecture theatres. The theatre thus became a microcosm of integrated sciences and technologies.

External architects selected for designing the buildings in the science precinct of SGS around the western end of University Avenue (Eggleston, MacDonald and Secomb) worked in close collaboration with me and my colleagues in the design of a sequence of lecture theatres for Physics, Chemistry, Geology, Psychology and Botany/Zoology and Forestry. This iteration of theatre designs was a particularly successful role for the ANUDU to try out new concepts in the many areas of detailed design, acting as a continuing repository for those ideas that proved successful and, just as importantly, those that were not fully successful, needing some modification next time a lecture theatre was called for.

This was indeed research on the run, a living laboratory directly applied and appropriate to better architecture and the art and science of teaching. Regrettably, being a service unit within ANU the Design Unit never received the recognition for its hands-on research nor did it receive any research funding – but we did it anyway within the limits of the budgets we worked to for each individual building we had to guide and furnish.

One particular aspect we worked on for a long period was the use of carpet in lecture theatres and teaching rooms. It was commonly accepted in the 1950s and 1960s that the most economical flooring surface was either linoleum or vinyl tiles – until we were able to prove with hard economic facts that over a period of time – about 20 years, that if the cleaning, surface treatments and repairs were taken into the calculations then a good quality carpet was not only lower in overall cost but had an intangible benefit reducing the furniture noise factor and improving the acoustic quality of all teaching rooms where carpet was laid.

We even designed and made a small electrical test machine to give us some relative wear data of the various carpets and comparative acoustic testing showed remarkable improvements in speech recognition due to the lower reverberation times that were achieved. My 1945 Distinction thesis on ‘Sound insulation in buildings’ from the final examinations of the Royal Institute of British Architects became really useful. (A copy has just been received from the RIBA (some 70 years later !)

We pioneered the design of active lecterns in all these theatres (starting with the Haydon-Allen theatre through all the science buildings, the Duffield theatre at Mt. Stromlo to IAS Chemistry and Coombs theatres) enabling lecturers to control the lighting and projection of two or even three comparative visual images from the lecterns which were movable for personal positioning. The large (7m wide) tilting projection screen in the Coombs theatre proved a great success in the showing of comparative slide images.

Design however, is still a largely misunderstood word in Australia and is only slowly being recognised in the secondary curricula. Old impressions fade very slowly in the public mindset and the educational establishments need to recognise that design thinking and problem solving theory is equally useful (if not more so) to students in their future lives than the deeply entrenched tools they are given of literacy and numeracy.

The ANU Design Unit survived for a couple of years after I retired from ANU in 1977 but it had lost its impetus as a forward thinking unit in such a vital university, largely due to the lack of recognition of its long term usefulness and continuity of experience so well embedded in its staff. Money and an unenlightened management had become the dominant criteria and the integrated ambience and long vision of the campus and its contents was relegated to history. This developmental break is particularly evident in the disrespectful conglomeration of the ANU campus architecture which has arisen since the 1980s. It has lost its way and its cohesive identity. Has it lost its right to call itself a well rounded seat of learning if it ignores the integrated aspects of its ambience, its character and its quality ?