Neville moved to St David’s somewhere around the 1970s to a new church which was being constructed (he subsequently became a Bishop) and he asked me to design (at various times over some 30+ years) several ecclesiastical items such as altar, reredos screen, cross, altar candlesticks, lectern, hymn number board, Pascal candelabrum, font, chancel seating and finally a design clean up of the W end of the church which never eventuated because of his death in 2010. He was, in a sense, a sort of patron who every now and then popped up with a new project, usually resulting from a bequest to the church. Sometimes they provided a fee.

My motivation (as an atheist !) was purely in practicing my sculptural skills in silicon bronze and stainless steel, a continuing interest from about 1960 to 2010 starting at my workshop in Jansz Crescent, Griffith, continuing at Little Burra and then at Shackleton Circuit, Mawson. As the ‘collection’ grew at the sanctuary end of the church I developed an integrated approach involving some formal relationships between the various items which became a sort of ‘ownership’ of a particular area of ecclesiastical endeavour – an unusual challenge.

I designed and made the cross, candelabra (2), reredos screen and the silicon bronze parts of the font and of the Pascal candle – all others were designed by me and made by craftsmen with better skills than I could supply. It worked well and the craft workers who made the stainless steel Pascal candelabrum and the font structure enjoyed themselves in crafting some unusual decorative metalwork. I certainly enjoyed the collaboration.

The font had to be placed more toward the western end of the church because of lack of space at the eastern, sanctuary end and this became a real challenge as it had become, from usage, a receptacle for anything that would not be suitable for the sanctuary. 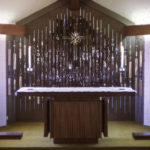 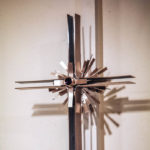 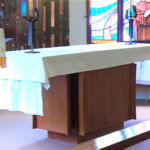 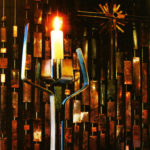 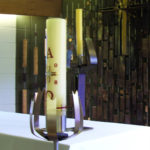 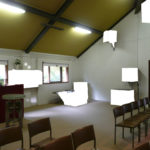 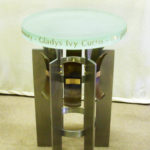