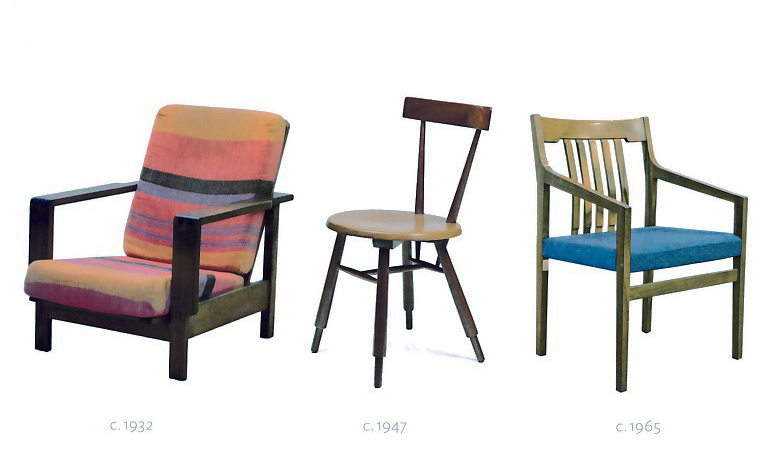 Having settled into my new private practice at Byrnes Mill, Queanbeyan I was asked in 1980 to carry out a survey of all furniture designed by Fred Ward and myself for ANU during our consecutive tenures in the ANU Design Unit from 1954 to 1977.

It turned out to be a monumental task, occupying my time for several months and completed in 3 loose leaf grey volumes which I understand are now in the possession of The ANU Heritage Officer, Amy Jarvis. It showed that the ANU Administration had little understanding of the historical significance of Ward’s role in Australian history and cared even less for its maintenance in situ.

Over the years there had been a quiet pilfering of individual items of Ward’s furniture by staff, which at least indicated there was some some recognition of its value.

At one time under the control of one particular Master of University House, most of UH furniture items had been dumped (with no control of good stacking practice) in the basement, to be replaced with some horrible commercial items. This showed an appalling lack of respect for the enormous historical significance of Ward’s efforts in furnishing UH in the early 1950s.

This latter aspect caused me to take 6 years to write a book about Fred Ward’s pioneering contribution to Australian furniture in the mid 20th century. The book was self-published in 2013 – “Fred Ward, pioneer Australian designer 1900 – 1990” and launched with an exhibition of his works at the Gallery of Australian Design in Canberra in June. (ISBN 9780975212639 paperback).

I am delighted to report that the book has had a remarkable effect, particularly on the Canberra community, alerting them to the fact that Ward’s prodigious output and influence in Australia would place him at the pinnacle of Australian furniture designers – easily on a par with the revered English designer / makers Sheraton, Chippendale and Hepplewhite.

A further survey by Meredith Hinchliffe of UH furniture was undertaken in 2015 at the instigation of the Master Peter Konowski, Professor of Forestry.

The influence of the ANU Design Unit during its 23 years of existence has now been documented to some extent as to its historical significance and the fact that there has been no controlling ANU influence over aesthetic matters on campus ever since 1977 is a matter of great regret. It can clearly be evidenced by the downward, heterogeneous direction of the architectural scene since 1977. This is, to my mind, largely attributable to the rise of management ethos to the detriment of what really matters in the long run.

The range of the ANU Design Unit’s influence can be seen throughout many of the segment
headings shown in this Portfolio and could form the subject matter of a single book in the future.